Jeff needed to head to Cordoba to pick something up. Something that couldn’t be shipped. And he asked me if I wanted to tag along. Heck yeah! Being an American, and that long road trips are in our DNA, I had my bag packed in 5 minutes and was waiting by the front door at … END_OF_DOCUMENT_TOKEN_TO_BE_REPLACED

Today was a day. A monumental day. Jeff got the vaccine. And we did a few other things, too. It started out early, and only 6 hours later we were home again. I like to be early to things. To me, being late is disrespectful and just plain dumb. The early bird catches the worm. … END_OF_DOCUMENT_TOKEN_TO_BE_REPLACED

Under the heading of ‘What can go wrong, will go wrong’, the last 12 hours have been interesting. It felt a little like we were Tina Fey and Steve Carell in the movie ‘Date Night’. How can so many things stack up against you? We were spending a quiet evening at home watching ‘Drunk History’ … END_OF_DOCUMENT_TOKEN_TO_BE_REPLACED

I’ve been told I have a ‘Justice Complex’. But I figure if there is one complex to have, justice is not a bad one. And if there’s one thing I can’t stand it’s bullies and boundary-crossers. People who think it’s OK to intentionally make other people’s lives less wonderful, and sometimes much harder, than they need to be. And I just won’t have it. END_OF_DOCUMENT_TOKEN_TO_BE_REPLACED

When we moved to Valencia, everything was different. I felt so bombarded by the differences that any subtlety or shades of grey were completely missed. The things we were dealing with were all primary colors and right in our faces. Now that we’ve lived in Spain for 16 months, I notice other things. Jeff talked … END_OF_DOCUMENT_TOKEN_TO_BE_REPLACED

When I came home from walking the Camino Frances in summer 2017, I needed quiet. After being on the trail for so long with other people who were having that same intense experience, I found it difficult to return to regularly scheduled programming.

It may sound like a big stretch, but at the time I imagined it like coming home from Afghanistan. You’ve had this intense experience far from home in a foreign country. It’s challenged you body and soul, and you’d had it with strangers who became friends/family. Then you find yourself back home eating chicken lettuce wraps at PF Changs with girl friends and they ask you questions about your experience. But you quickly realize you cant really explain it so they’ll actually understand what you did and what it meant to you. You’re completely changed and you’re at a loss. You’ll never see yourself the same again.

So you speak in broad terms but you try not to go too deep. I found most people didn’t really want to hear the deep stuff and, frankly I didn’t want to try to go there. I knew they’d never get it. And it sort of dimmed the magic I wanted to hold for myself.

But even though my friends couldn’t understand what I’d experienced, I also knew they fell into two categorizes:

#1- They knew I had changed and were happy for me. I was happier and thats all they needed to know. This group was supportive but I still brushed the surface on any Camino conversations.

#2- They saw the changes, didn’t get it and it made them terribly uncomfortable. This group did a lot of ‘Yeah, but weren’t you…?’ And ‘I don’t get why you’d wanna do something like that,’ This reaction required me to not talk about it – even at the surface. So I stopped right there.

Jeff fell into the first group but, of course he wanted to understand and hear about it in detail. Because he saw the changes more than anyone. And his crazy wife was saying we should move to Spain. But did he get it? No. He couldn’t. Not his fault, but he hadn’t done it.

So here we are, walking from Sarria to Santiago de Compostela. A short Camino by my previous experience, but no less valid. When Jeff said he wanted to do it I was a little surprised but was happy a plane and train ticket wouldn’t go to waste. But would he be able to get a Camino experience in such a short time? Enough to finally understand? Or does that take the full 800 km 4-5 week trek thru sleet, hail, 100 degrees in the meseta, mountain ranges, and an angry teenager? I really didn’t know.

Then we were eating dinner on night 2. A friend and I were texting and I was reiterating the conversation to Jeff. His response made me smile.

‘They just need to come do this. You can’t really explain it so anyone understands unless they’ve done it. ‘

Ah. So now he gets it! It only took one day of water wars and the long slog to Palas de Rei to get there. And I knew his Camino transformation was starting to take hold when he broke out his Mountain Hardware hiking kilt. I didn’t know he’d packed it. And with the weather being so cool I wouldn’t have anticipated its appearance. But, yup, there it was one cold, wet morning. Bold move. Respect. 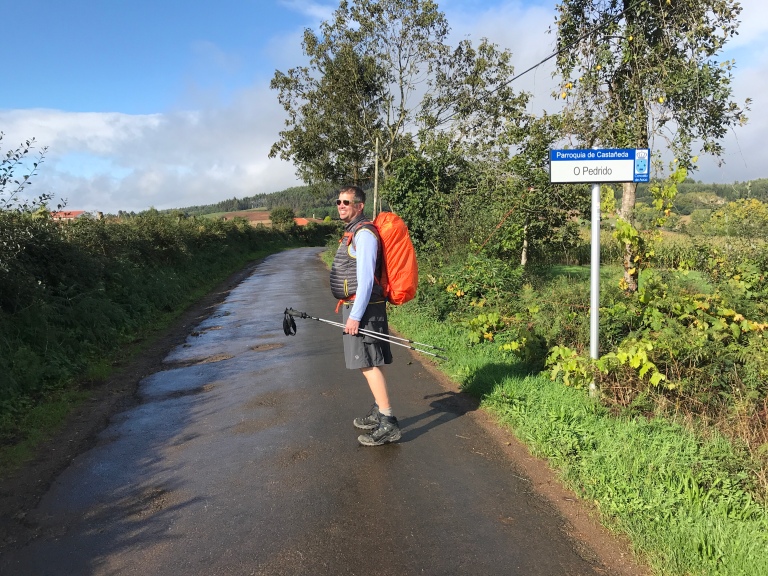 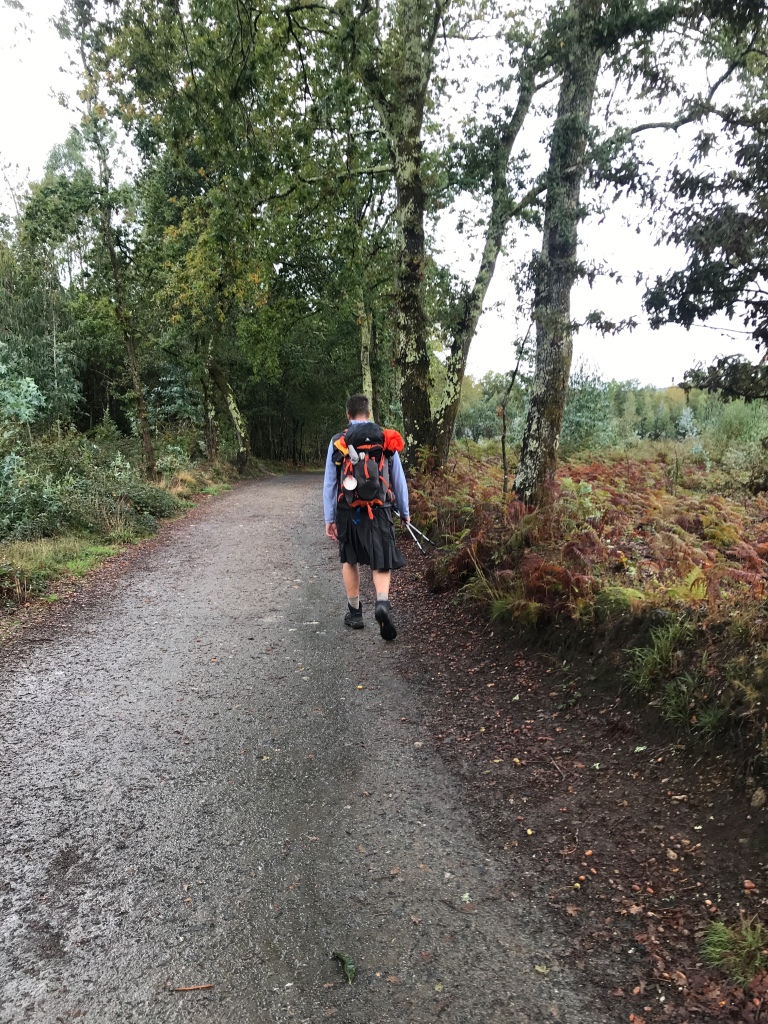 So I was impressed. And it ensured Jeff was given his official Camino moniker.

None of this was meant to be derogatory. It was just how people easily categorize each other when they don’t know your name or have history. I did the same when describing other people I didn’t know.

Jeff’s Camino moniker is ‘That American guy in the kilt’. And while usually very shy, he’s owning it like a boss. Towns? Villages? On the trail? Old men in cafes laugh and shake their heads. Furious discussions strike up in multiple languages in our wake as we pass. That’s what happens when you look like a tall Norseman striding from one village to another. When a giant waves sticks at you and offers a hearty ‘Bon dia’.

He’s been asked ‘Are you Scottish?’ Or ‘What part of Scotland are you from?’ And when he says he just likes a good kilt you can see their confusion. It makes him laugh.

So we are both enjoying this adventure together and I’m so glad he decided to make the time. Jeff’s already talking about doing the full trek on one of the many routes in the near future. And I’ll be proud to accompany ‘That American guy in the kilt’ any time he likes.

2 thoughts on “Now He Gets It”