Sure, I like ancient stone walls. Thick beams that might be from trees felled centuries ago. In theory. But I also like a couple of other things. Like a driveway I could drive a car down without bush-wacking to the front door. And speaking of a front door, I’d like to get into it without peeling back vines, kicking the wood to loosen the tricky church-key lock, and ducking – like a Hobbit. END_OF_DOCUMENT_TOKEN_TO_BE_REPLACED

The mistress of travel has not been kind to me. Although there were minimal delays this trip back to Valencia from Portland, mostly because American Airlines wasn’t involved, her twin demons, Jet-lag and Chatty Seat-mate, did their worst. I knew I should have taken the paid Business Class upgrade when it was announced in Seattle. … END_OF_DOCUMENT_TOKEN_TO_BE_REPLACED

I’ve been told I have a ‘Justice Complex’. But I figure if there is one complex to have, justice is not a bad one. And if there’s one thing I can’t stand it’s bullies and boundary-crossers. People who think it’s OK to intentionally make other people’s lives less wonderful, and sometimes much harder, than they need to be. And I just won’t have it. END_OF_DOCUMENT_TOKEN_TO_BE_REPLACED

Jeff will be starting his journey home from the US while I’m stepping onto a train to leave Valencia. So he’ll be at home waiting while I’m seeing the sights in Barcelona. But I don’t care so much about that. I’m glad he’ll be there waiting, because we’ve hit critical mass on him being away and I’m sort of stuck without him. END_OF_DOCUMENT_TOKEN_TO_BE_REPLACED

We are home from Morella. Just pulled in after a long weekend of new sights, new sounds and ALOT of ground covered. Morella is north of Valencia by about 2 hours on a motorcycle. I’ve been interested in Spanish prehistoric cave painting for decades and I’ve never indulged in taking the time to seek them … END_OF_DOCUMENT_TOKEN_TO_BE_REPLACED

We are in Bilbao. Fallas Refugees. We’ve met so many people lately who are Fallas Virgins. They can’t believe we are leaving to escape ‘All the Fun!’. I’ve been called a ‘fuddy duddy’ and a ‘buzz kill’. But they’ll learn the closer we get to March 19th when all hell breaks loose. I heard from an experienced expat that they passed a new law this year; now they can’t shoot off sanctioned fireworks between 2:30 and 7am. Whew! A whole 4 1/2 hours of sleep coming right up. It’s really that last week when it’s non-stop and the entire city goes nuts, and ‘sanctioned’ isn’t really the issue.

So we fled. And boy are we glad. Full nights sleep and a lovely vacation to Northern Spain. Bilbao is a city on the north coast, right on the Bay of Biscay and the Atlantic Ocean. Its the beating heart of the Basque region. Culturally, and culinarily, it’s very different than Valencia. And Basque is a language that is nothing like Spanish or Valenciano.

I fell in love with Navarra when walking the Camino, so it feels wonderful to be back in the region. The Camino Frances doesn’t go through Bilbao. You have to walk the Camino del Norte if you want to do that. And just like so many other places in Spain, the flights from Valencia to Bilbao were cheaper than one way train tickets from Valencia to Barcelona. Who can pass up 7.99 euro airline tickets? Not me! 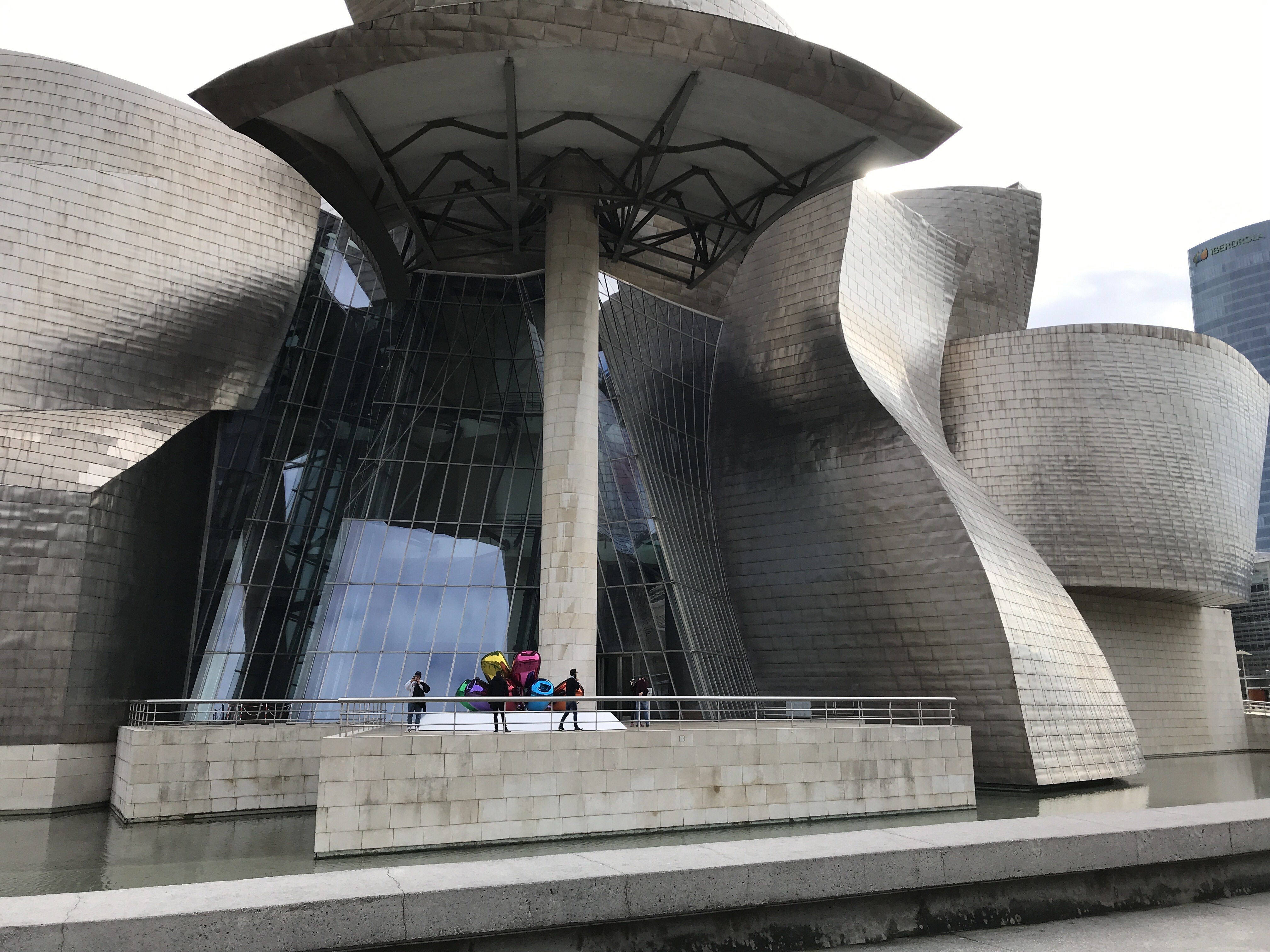 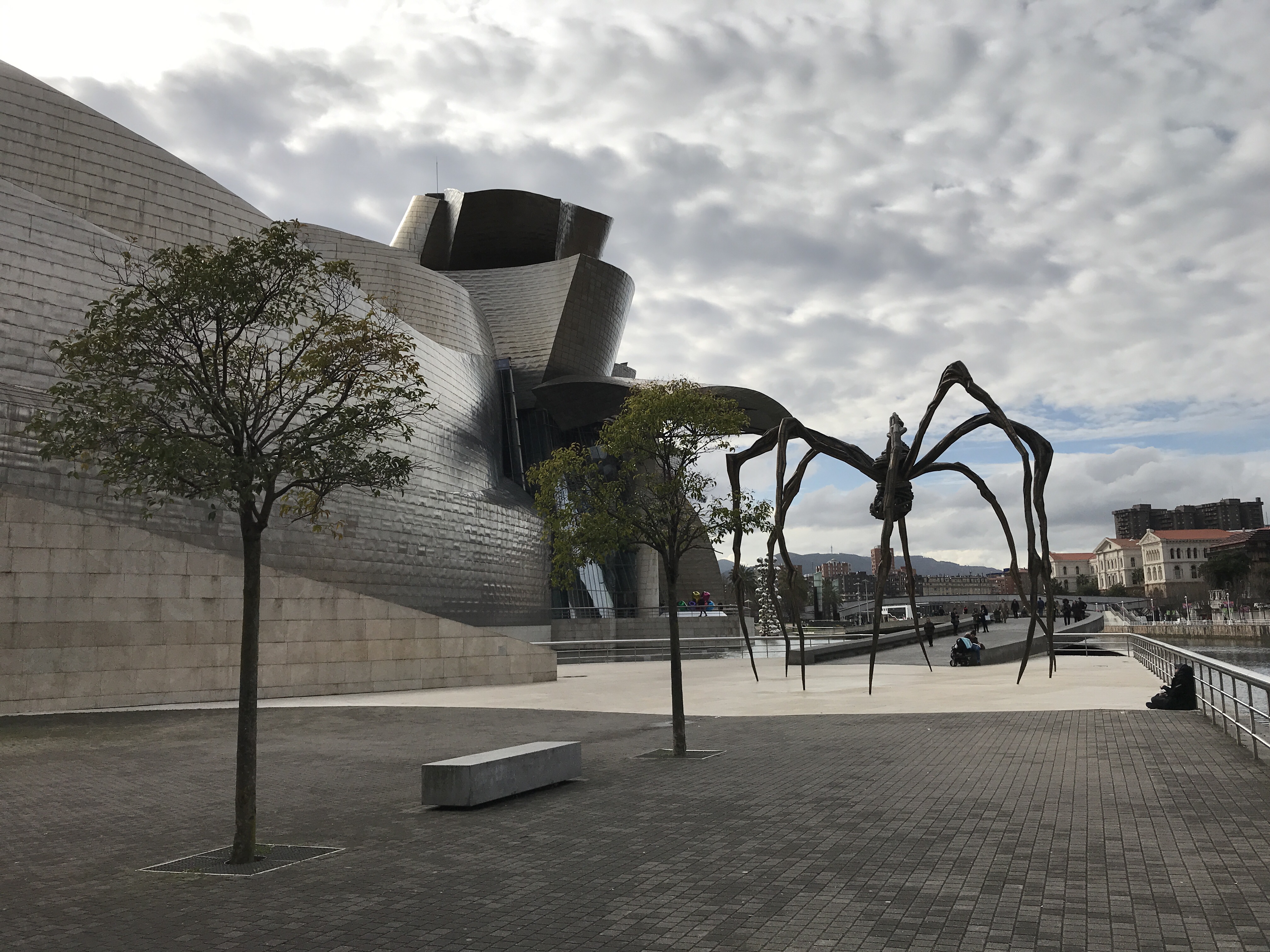 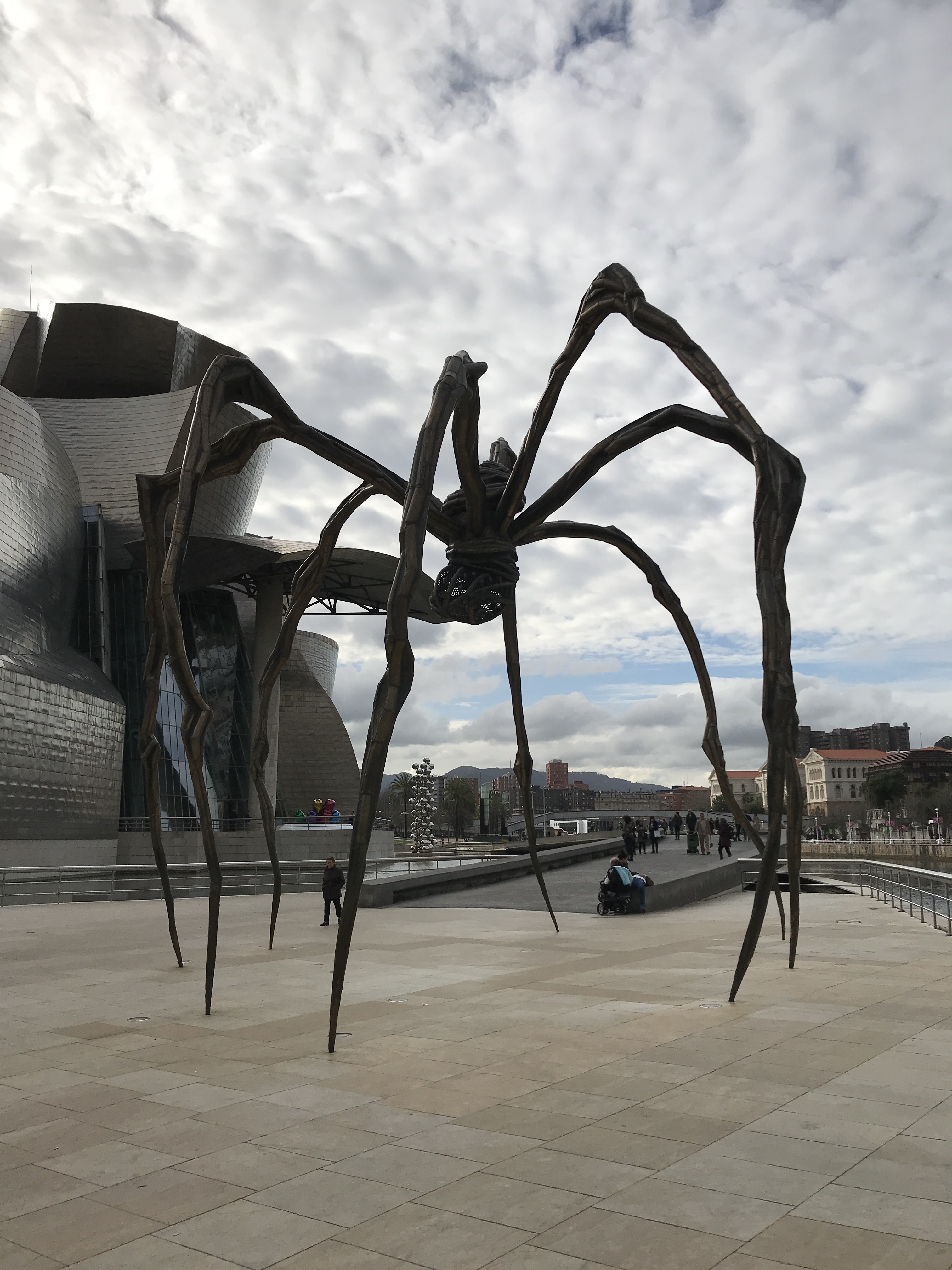 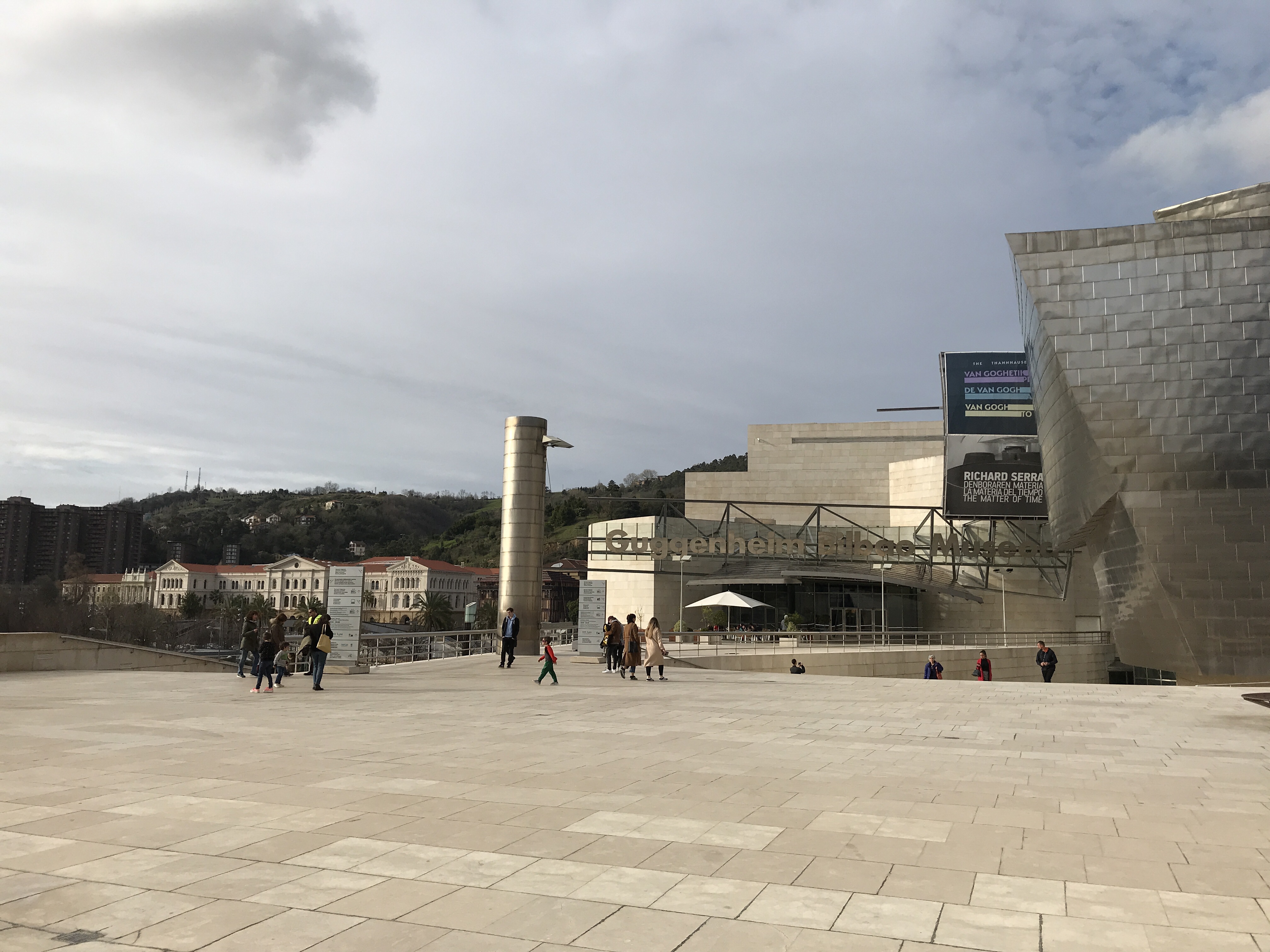 We are staying downtown near the Guggenheim Art Museum, It’s look alike cousin in Seattle, the famed EMP, (Experience Music Project) means that its architecture is something familiar to us. We will spend a day exploring their current collections in a few days. 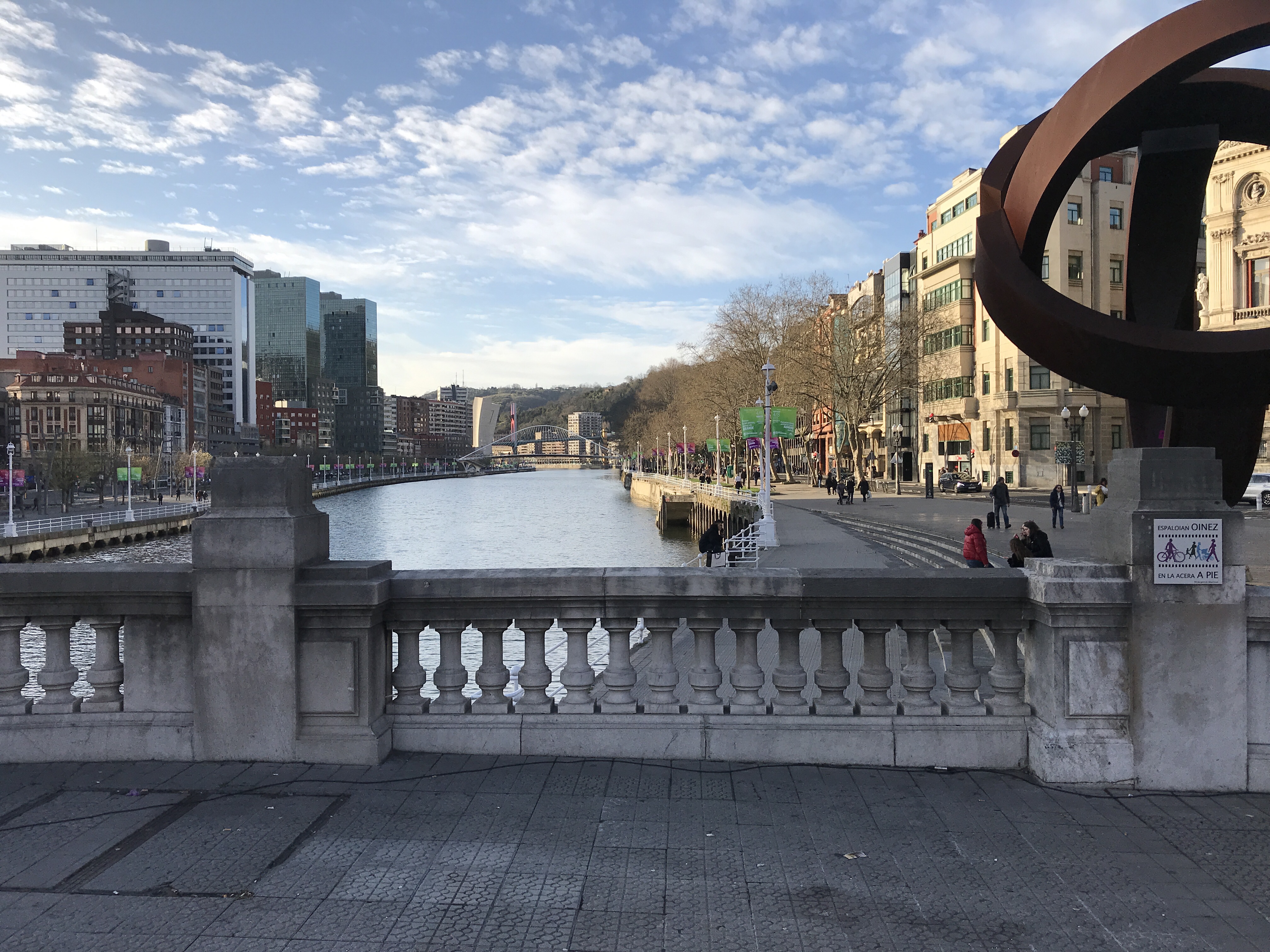 The architecture in Bilbao is part 20th century Spanish, part 18th and 19th century cross European, blended with 21st century creative genius, and up on the surrounding hills they look more Swiss village. It’s wet, green and cold with dappled sunlight. Jeff is in heaven. One guy told me this time last year they were under feet of snow. Hmm.

The signs are in Spanish and Basque. Sometimes in Ingles too. Driving here is A LOT easier than in Valencia. Wider roads that makes sense. Imagine! Getting from the airport to town took maybe 20 minutes door to door and I’m happy to report even with me driving there was no swearing, tears or recriminations. When we arrived we saw that Valencia isn’t the only city in Spain to celebrate the Spring equinox. There is a festival in town and marchers for international Women’s Day. Lots of people out and about and rides with the requisite Churroteria to make the celebration that much sweeter – and deep fried.

We haven’t scratched the surface of the area yet but the blend of old and new has our attention and we are ready to hit the ground running exploring and, of course, looking at real estate. So far so good.

One thought on “Hola Bilbao”

Scroll to Top
The Happiness Cafe
The Camino Provides