Jeff needed to head to Cordoba to pick something up. Something that couldn’t be shipped. And he asked me if I wanted to tag along. Heck yeah! Being an American, and that long road trips are in our DNA, I had my bag packed in 5 minutes and was waiting by the front door at … END_OF_DOCUMENT_TOKEN_TO_BE_REPLACED

Today was a day. A monumental day. Jeff got the vaccine. And we did a few other things, too. It started out early, and only 6 hours later we were home again. I like to be early to things. To me, being late is disrespectful and just plain dumb. The early bird catches the worm. … END_OF_DOCUMENT_TOKEN_TO_BE_REPLACED

Under the heading of ‘What can go wrong, will go wrong’, the last 12 hours have been interesting. It felt a little like we were Tina Fey and Steve Carell in the movie ‘Date Night’. How can so many things stack up against you? We were spending a quiet evening at home watching ‘Drunk History’ … END_OF_DOCUMENT_TOKEN_TO_BE_REPLACED

I’ve been told I have a ‘Justice Complex’. But I figure if there is one complex to have, justice is not a bad one. And if there’s one thing I can’t stand it’s bullies and boundary-crossers. People who think it’s OK to intentionally make other people’s lives less wonderful, and sometimes much harder, than they need to be. And I just won’t have it. END_OF_DOCUMENT_TOKEN_TO_BE_REPLACED

When we moved to Valencia, everything was different. I felt so bombarded by the differences that any subtlety or shades of grey were completely missed. The things we were dealing with were all primary colors and right in our faces. Now that we’ve lived in Spain for 16 months, I notice other things. Jeff talked … END_OF_DOCUMENT_TOKEN_TO_BE_REPLACED

It’s been hot here. Really HOT! So hot that even going to the beach is a fools errand. You hardly see people out on the street. Spaniards aren’t stupid. Screw the siesta. The entire month of July and August deserve siesta. Just laying down and going into some sort of suspended animation – like a bear hibernating – except instead of a cave in winter its on the surface of del Sol.

Now I know heat. We spent two years in Arizona in the Valley of Death. Not Death Valley – a proper name – the Valley where Phoenix and Scottsdale sit where you’ll actually die if you go out at mid-day for more than about 10 minutes without shade. We used to do our daily walks in the summer there at midnight or before the sun rose in the morning. That was fraughts with animals that would like to kill you and eat you, on top of the heat cooking you from the pavement beneath you.

Here it’s just as bad right now – perhaps worse with the humidity. Yesterday I decided to take the Valensibi bike to my Spanish lesson. It’s on the North side of the city near the IMED (Four Seasons of Hospitals) so I have walked up that way many times. I know how far it is. But I was running a little late and thought I would use my GPS to pinpoint it and then ride so I wouldn’t get there after the other students. I’m having an intense group class with other Expats I know – just this week – so I didn’t want to be the last to arrive and recite my homework. That was a grave mistake.

I swear the route doubled itself since the last time I went out there. I rode and rode and rode some more. It was awful. I found the back side of the building and then went in search of where I could drop my bike off at a Valenbisi bike station. The closest one was like a mile away. OK – I rode over there and had to stop 2 times on the way to hydrate while cooking in the sun at lights.

Then I had to make my way back to the school and what did I see? Oh yes, the tram that runs blocks from my house in Benimaclet runs right in front of the school. WHAT!?! Other students were getting off looking refreshed from their air conditioned ride, hopping into the school to greet the receptionist. I was like a melting popsicle who just flowed through the door and left a wet spot on the chair. They all looked at me like I was crazy – they actually told me I was crazy – for riding a bike in this weather.

I was telling a friend last night about it after coming home from the Mercadona having had to purchase a cooler from the El Chino next door to it before attempting to purchase ice cream. They don’t have A/C in their apartment and they’re dying. I told her I believe we are missing a festival here.

‘Fiesta de la Sweat’! Come on, it will be fun! I riffed some ideas last night but I’ve had time to mull it over and I think I’ve got the details worked out.

Of course, I’m in the early stages of planning for next year’s Fiesta de la Sweat – I’ll keep you posted on the exact dates. Oh wait! Or you could just watch the temperature gauge. When it hits 35 – that’s opening ceremonies day. Mark you calendars in advance.

This morning, after a coffee, we decided to head out and run some errands. But first we stopped off and visited a local tower that used to be the gate tower for the old city of Valencia. If people wanted to enter the town, they had to pass through one of the 12 gates that were built into the walls surrounding the city, first. But this was the main entrance to the city as the road to Barcelona and the road to the surrounding mountains terminated at the gate.

The tower is called Torres de Serranos and it dates back to 1392, when they started construction, and completed it in 1398. The rest of the city walls and towers were torn down in the 19th century but because Torres de Serranos, and a couple of others were used as prisons at the time, they were saved from the demolition.

The opening ceremony for Fallas is conducted on a platform in front of the tower every February. So it is kind of an iconic and beloved landmark now.  And with the 100’s of school children converging on it as we were finishing our 2 Euro self-guided tour, it is clear that it continues to have importance in the educational history of the area. 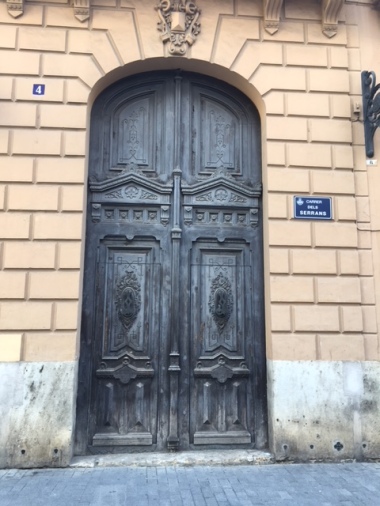 The views from the many levels are stunning. And I continued to be amazed at how these structures were built with no real technology – as we have today. No machinery. It’s clear why tradesmen were so highly prized back then. Stone masons and their knowledge passed from one generation to another. The precision for setting stone that last for more than 600 years is awe-inspiring. 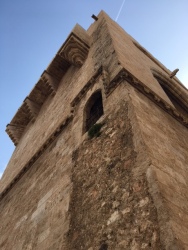 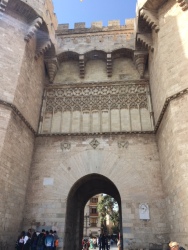 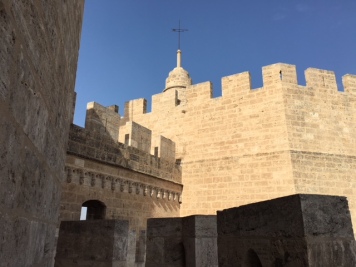 The stairs throughout the tower have been largely left as they were. Hand rails are optional – even today. One thing we’ve noticed in some of our castle crawling is that the Spanish don’t have the same need to bubble wrap everything that Americans do. The stairs are treacherous – but, Oh well. The ratio of school children to adults is about 25 to 1. The attitude being ‘Don’t jump or you’ll die’. Basically, just have some common sense. We don’t take that tack back home. There would be wavers and a lot of modifications for ensuring safety would be virtually guaranteed.

Another thing we noticed about gathering clubs, whether its school children, groups of adults in the park or just friends, people here gather in circles a lot and hold hands before undertaking something. We don’t have any insight into why but it’s clearly a cultural thing. You don’t see this in the US. Especially with adults. We never hold hands with anyone we’re not dating, especially if they’re the same sex. Maybe it’s our puritanical grounding, but here they communicate by connecting everyone physically and encouraging people to look each other in the face, and talking. Imagine – looking at other people in your group. And they aren’t praying, so it’s not religious. I would be very interested to understand how this started and what this seemingly pervasive ritual is all about.

But it must work, because none of the children we saw, after their circle ritual in the square below, were out of control or jumping on the ramparts waiting to be scolded by an adult chaperone. Unheard of.

So far, we’re loving how we can step out our door into a bit of history while just walking to the Decathalon to return a couple of shirts. It seems strange but we’ve never incorporated a walk through a historical site into a quick shopping trip before. But considering where we live now, I think it’s inevitable going forward. And it’s exactly where we want to be.