Sure, I like ancient stone walls. Thick beams that might be from trees felled centuries ago. In theory. But I also like a couple of other things. Like a driveway I could drive a car down without bush-wacking to the front door. And speaking of a front door, I’d like to get into it without peeling back vines, kicking the wood to loosen the tricky church-key lock, and ducking – like a Hobbit. END_OF_DOCUMENT_TOKEN_TO_BE_REPLACED

The mistress of travel has not been kind to me. Although there were minimal delays this trip back to Valencia from Portland, mostly because American Airlines wasn’t involved, her twin demons, Jet-lag and Chatty Seat-mate, did their worst. I knew I should have taken the paid Business Class upgrade when it was announced in Seattle. … END_OF_DOCUMENT_TOKEN_TO_BE_REPLACED

I’ve been told I have a ‘Justice Complex’. But I figure if there is one complex to have, justice is not a bad one. And if there’s one thing I can’t stand it’s bullies and boundary-crossers. People who think it’s OK to intentionally make other people’s lives less wonderful, and sometimes much harder, than they need to be. And I just won’t have it. END_OF_DOCUMENT_TOKEN_TO_BE_REPLACED

Jeff will be starting his journey home from the US while I’m stepping onto a train to leave Valencia. So he’ll be at home waiting while I’m seeing the sights in Barcelona. But I don’t care so much about that. I’m glad he’ll be there waiting, because we’ve hit critical mass on him being away and I’m sort of stuck without him. END_OF_DOCUMENT_TOKEN_TO_BE_REPLACED

We are home from Morella. Just pulled in after a long weekend of new sights, new sounds and ALOT of ground covered. Morella is north of Valencia by about 2 hours on a motorcycle. I’ve been interested in Spanish prehistoric cave painting for decades and I’ve never indulged in taking the time to seek them … END_OF_DOCUMENT_TOKEN_TO_BE_REPLACED

We are spending our last week in Ireland in Derry or Londonderry. Depending upon your political point of view. More on that in another post. So it was the moment to see the Giant’s Causeway.

This basalt rock phenomenon occurs on the Northern coast of Ireland. If you require a little courage before your visit you can stop in Bushmill for a wee dram before you get to the truly majestic scenery a couple miles down the road. I say ‘miles’ because here in Northern Ireland its miles not kilometers. There was no sign when we crossed from Ireland to the UK/Northern Ireland welcoming us to a new country, except the one telling us that now we were calculating speed signs in miles. But our car only had kilometers. So we were doing backwards calculations to figure out how not to speed or go too slow.

In Ireland there are speed signs every 10 meters – even the farmers driveway doubling as an Irish expressway. In Northern Ireland they tell you the speed once at the border with a hearty ‘Good Luck guessing it on the rest of these god-forsaken roads.’

We made our way to the Giant’s Causeway over hill and dale, but it was worth it. From Derry it’s an hour drive. I’d tell you the distance but it doesn’t matter. Distance here means nothing. Its time that matters. 28 kilometers can take you an hour as Google routes you through the parking lot of a welding workshop, only to find the one lane track you were on previously picks up on the other side. You think I’m kidding. Sadly, not. Jeff checked to see if there was a setting to stop this nonsense, but if we turned it off in the app we would never be able to leave the country.

The GC is part of The National Trust of the UK. The Trust was set up in the late 19th century to save historically significant buildings and locales. They do good work and The Giants Causeway is head and shoulders their biggest draw every year. Heading for 3/4 of a million visitors annually. After seeing this area there is no mystery as to why.

It’s set up well with minimal impact to the environment. The visitors center is tasteful and not an ‘Exit Thru the Giftshop’ type of experience. If you’re a member of The National Trust its free. For a family that’s about 100£ per year. A bargin when planning on seeing other culturally significant places throughout the UK.

We did the self guided tour with the head sets, but could have waited the 40 minutes for the guided tour that is also included in the ticket. It was awe inspiring.

The place was created by lava flows, chemical weathering, and time. The hexagonal rocks and pillars are otherworldly. 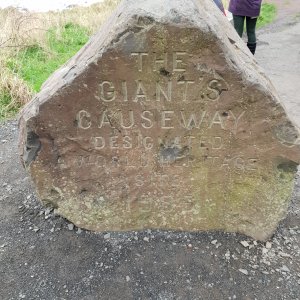 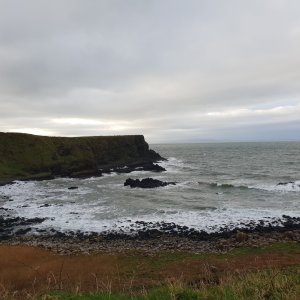 The walk down to see them is stunning. 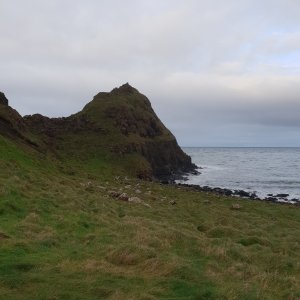 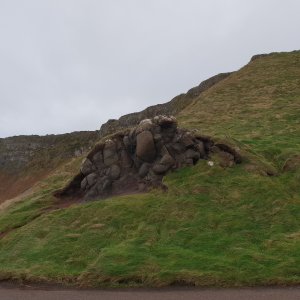 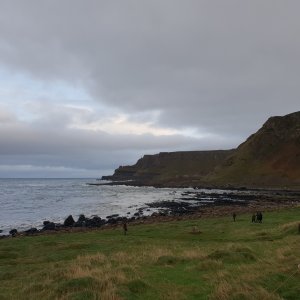 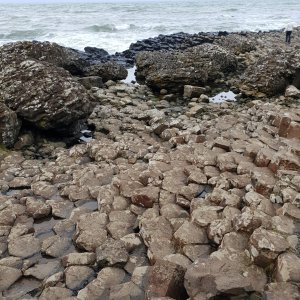 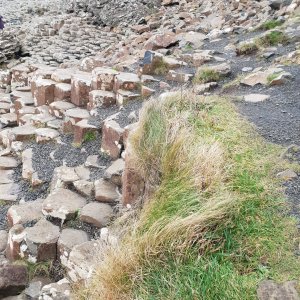 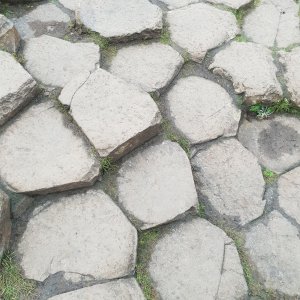 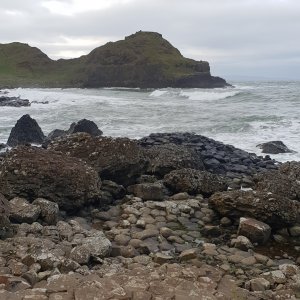 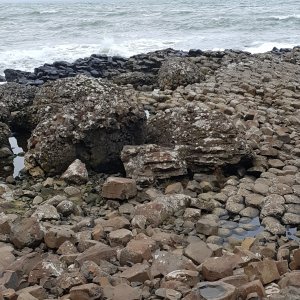 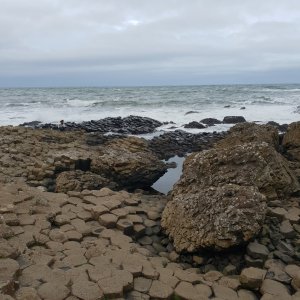 The Irish legend goes something like this. There was a giant called Finn. He created Ireland and he was pissed at a Scottish giant who wanted to threaten his land. So he threw the hexagonal stones into the sea to scare his foe, who used them as a bridge or causeway to run across the sea from Scotland to fight Finn. Well, Finn saw him coming and was shocked by his size. He knew he was outmatched so he ran home to his wife, and cried like a baby.

She knew just what to do and wrapped Finn up, swaddling him like a baby and put him in bed. The other giant found his way to their cottage and asked the wife where her husband was so they could fight. She told him Finn was out. But he searched the cottage anyway and heard ‘the baby’ crying – it was Finn afraid to death. But the other giant thought ‘If this is the baby, then his father must be huge!’. So he ran back to Scotland, tearing up the causeway with his footsteps. There are similar basalt pillars on the Scottish side today to prove the story. 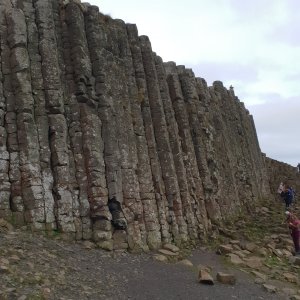 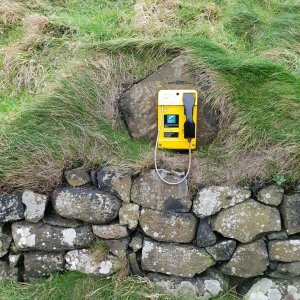 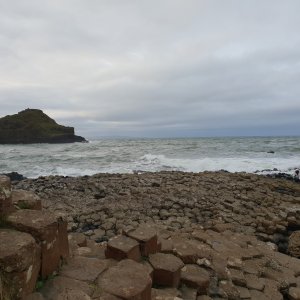 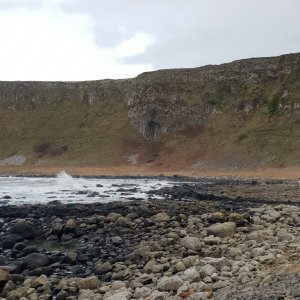 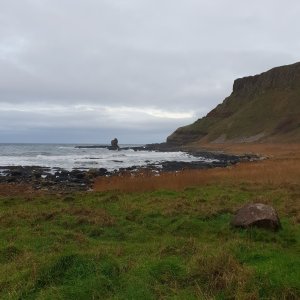 In fact, about 60k yrs ago, lava flowed and formed these pillars. It took 40k yrs for the pillars to interlock. Hexagons are some of the strongest and most frequently occurring shapes in nature. Think honeycombs and tortoise shells.

We walked up to the Giant’s Pipe Organ, said to be heard once a year at 6am on Christmas morn. Then headed up top, via nearly one million stairs straight up, to make our way back. Hoping not to drive to Derry in the dark. The views continued to amaze the whole way. You could easily spend an entire day there. 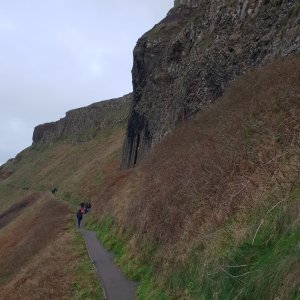 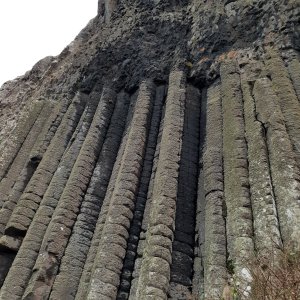 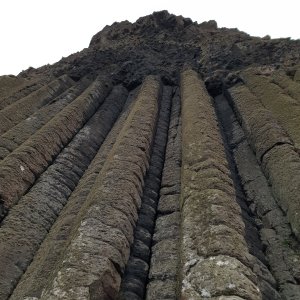 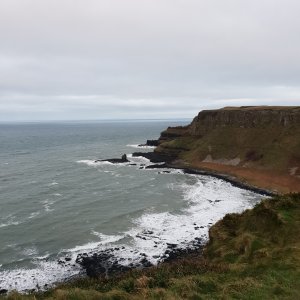 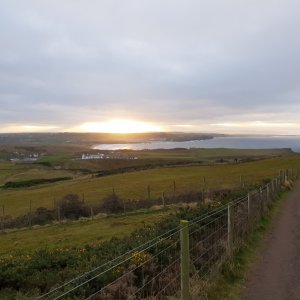 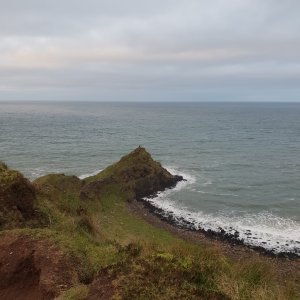 Well worth a visit to this UNESCO World Heritage site. And a strong recommendation on the Bushmills. The town is adorable – you might consider staying there for a night. More importantly, you might need a break from driving out there from Derry. But this is wild Ireland at its most raw and beautiful. Not to be missed.