Sure, I like ancient stone walls. Thick beams that might be from trees felled centuries ago. In theory. But I also like a couple of other things. Like a driveway I could drive a car down without bush-wacking to the front door. And speaking of a front door, I’d like to get into it without peeling back vines, kicking the wood to loosen the tricky church-key lock, and ducking – like a Hobbit. END_OF_DOCUMENT_TOKEN_TO_BE_REPLACED

The mistress of travel has not been kind to me. Although there were minimal delays this trip back to Valencia from Portland, mostly because American Airlines wasn’t involved, her twin demons, Jet-lag and Chatty Seat-mate, did their worst. I knew I should have taken the paid Business Class upgrade when it was announced in Seattle. … END_OF_DOCUMENT_TOKEN_TO_BE_REPLACED

I’ve been told I have a ‘Justice Complex’. But I figure if there is one complex to have, justice is not a bad one. And if there’s one thing I can’t stand it’s bullies and boundary-crossers. People who think it’s OK to intentionally make other people’s lives less wonderful, and sometimes much harder, than they need to be. And I just won’t have it. END_OF_DOCUMENT_TOKEN_TO_BE_REPLACED

Jeff will be starting his journey home from the US while I’m stepping onto a train to leave Valencia. So he’ll be at home waiting while I’m seeing the sights in Barcelona. But I don’t care so much about that. I’m glad he’ll be there waiting, because we’ve hit critical mass on him being away and I’m sort of stuck without him. END_OF_DOCUMENT_TOKEN_TO_BE_REPLACED

We are home from Morella. Just pulled in after a long weekend of new sights, new sounds and ALOT of ground covered. Morella is north of Valencia by about 2 hours on a motorcycle. I’ve been interested in Spanish prehistoric cave painting for decades and I’ve never indulged in taking the time to seek them … END_OF_DOCUMENT_TOKEN_TO_BE_REPLACED

No matter how much you love Fallas, and people do or don’t to varying degrees, you can’t help but look at these amazing sculptures carved from hardened liquid Styrofoam, and not understand that burning over 700 of these in one night is an environmental disaster. The chemicals and CO2 released as they melt (The Crema), and the black smoke that will sit in the air for days (unless it rains the day after like last year) means breathing for those with a compromised respiratory system will be a hazard. And not much fun for the rest of us.

I’ll be posting more photos of those in Benimachlet and the surrounding neighborhoods further down in this post, but as we walked around this year we talked a lot about how, while some of them are amazing masterpieces, it’s a terrible waste and a nasty pollutant. Centuries ago, the Falla was a pile of old castoffs from the furniture or arts workshops in the city, that had been produced indoors over the long winter. Someone put some clothes on a few of them to make them resemble people and it started marching towards what it is today. A full blown design major at the local Uni, and an industry unto itself.

But there is hope. I’m not a fan of burning anything – thinking back to our Irish Christmas when burning peat and coal to stay warm made my stomach turn (Ireland is changing that rapidly btw). But burning polystyrene for no real benefit is just wrong. And it seems there are those of like mind this year. Some of the neighborhood Fallas associations have abandoned these unfriendly materials all together and have fashioned their Fallas out of unpainted wood. It’s a small group and they’re pretty cool. So I’m featuring them first, before all the other ones we saw in the last two days. 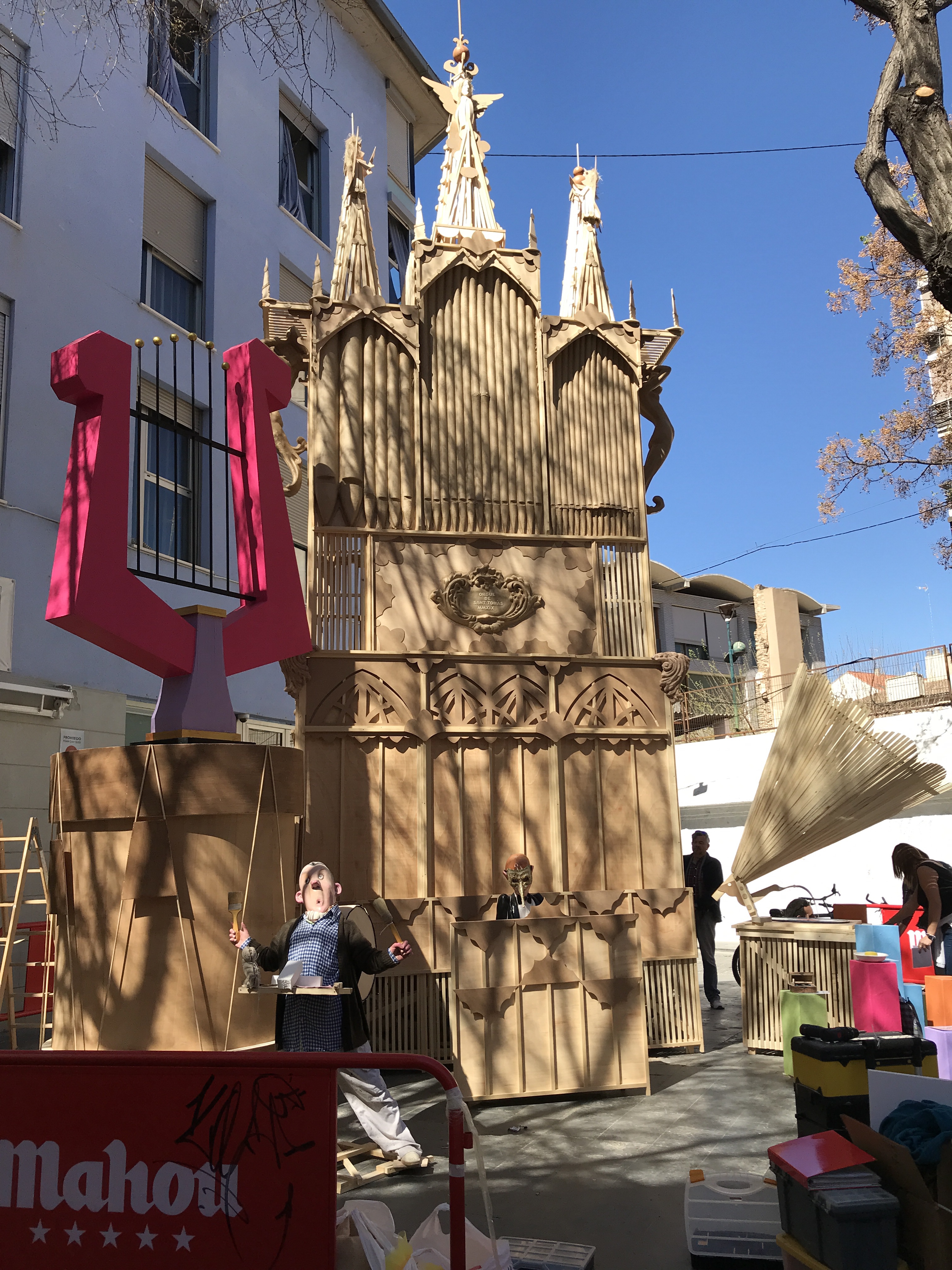 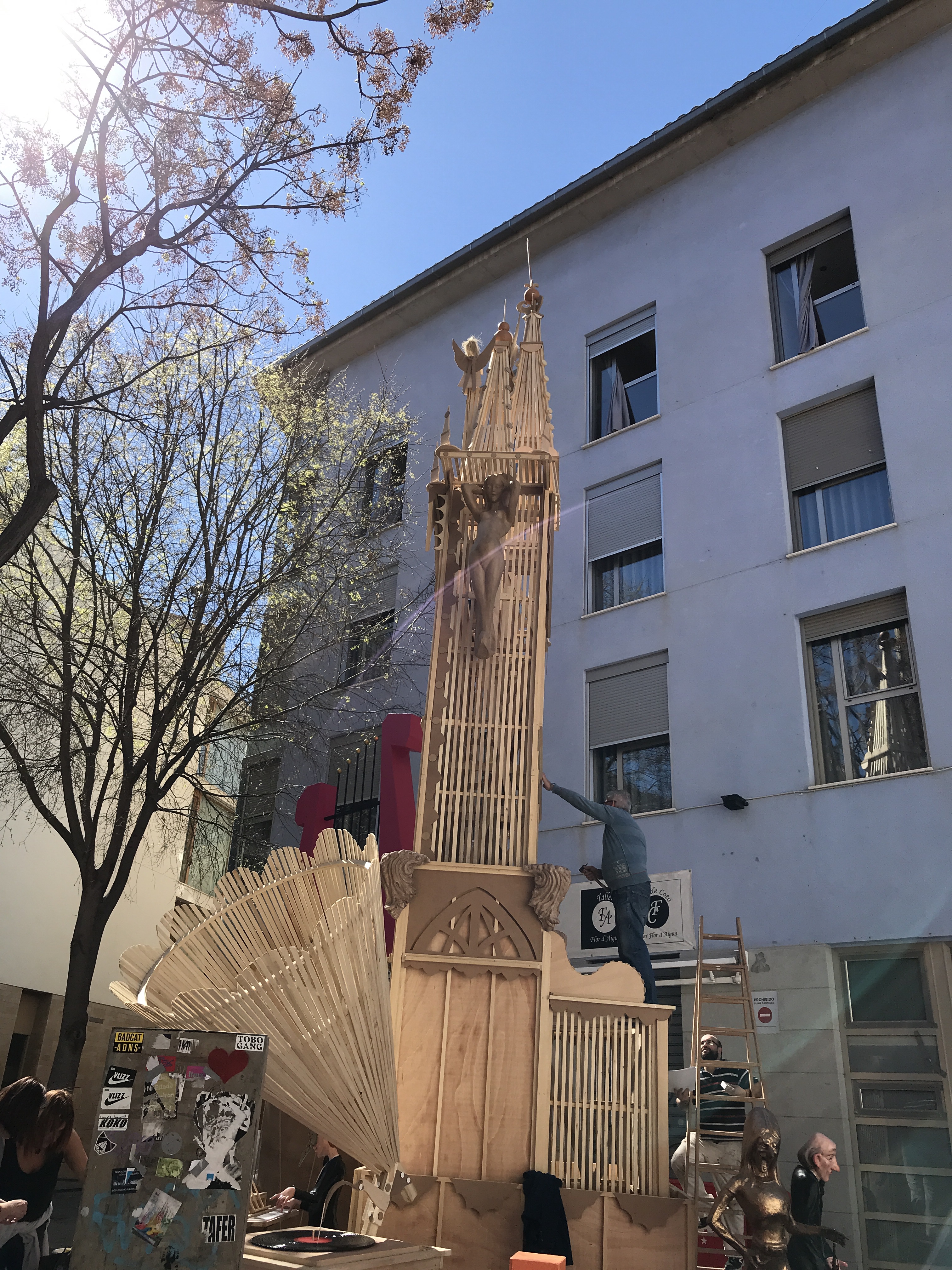 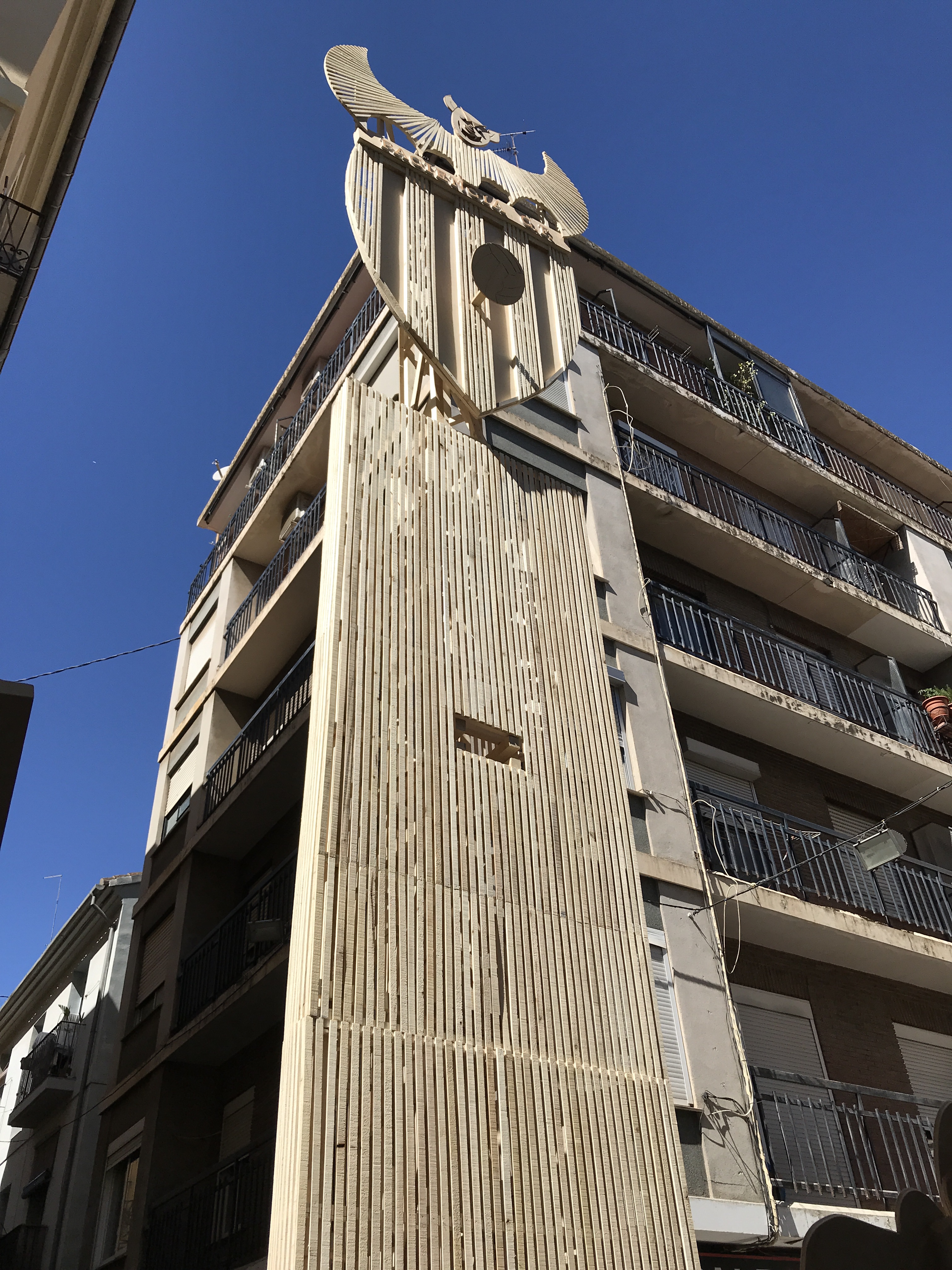 A full pipe organ built from wood you could get at the local BricoMart. Pretty amazing. And one celebrating the Valencia Fubol Club with their badge and the bat. Yesterday we saw another that would be a dragon when it was done, complete with scales – made of wood. I didn’t photograph it because it wasn’t ready but it’s nice to see that there are those getting creative with non-toxic materials. Sure, they’re still going to burn them – so that’s not so great – but they won’t be doing it with chemicals. Just the thin wooden dowels or cut plywood to create the skin of their creations. Everything is baby steps.

I wonder if next year we’ll see even more of these new fangled, eco Falla. Jeff wondered if maybe they have a new ‘eco friendly’ award category. I sure hope so, as I’ll be spending the night of the 19th as they burn, indoors with the air filter blowing. But still, this year there are some incredible Fallas. And I’m posting them for you to see – even though they’re not all completed yet. I was happy to see that most of the Infantils are up. So I focused a lot on those from multiple angles. More on that tomorrow. Enjoy!

You can clearly see there are three categories that each Falla falls into.

One other thing we noticed this year is the noise. Its warm at night and we like to sleep with the window open. Last year we couldn’t do that and sleep – at all. Sure, we were up at 4:30 this am due to some errant – illegal – fireworks at the crack of dawn. But we noticed that there are exponentially less booming fireworks this year. And the Mascletas aren’t as big as they were last year. I’m not sure why. We barely hear them in Benimachlet and last year they shook the windows.

Perhaps it’s a combination of a couple of things. We are used to the noise here. The random procession with the full marching band hardly phases us now. Waking up to fireworks on any given Sunday tells us that it’s either a wedding, christening or a holiday we forgot. Or maybe it’s because we’re becoming true Valencian’s. We know our local Fallas group, who our Falleras are, and the number of days until the next major festival. Yep – that’s what it must be. And I’ll take it.

Next post will be just The Infantils. This year the theme of those seems to be Love and Acceptance. After what happened in Christchurch this week I think we can use more of that.