Jeff needed to head to Cordoba to pick something up. Something that couldn’t be shipped. And he asked me if I wanted to tag along. Heck yeah! Being an American, and that long road trips are in our DNA, I had my bag packed in 5 minutes and was waiting by the front door at … END_OF_DOCUMENT_TOKEN_TO_BE_REPLACED

Today was a day. A monumental day. Jeff got the vaccine. And we did a few other things, too. It started out early, and only 6 hours later we were home again. I like to be early to things. To me, being late is disrespectful and just plain dumb. The early bird catches the worm. … END_OF_DOCUMENT_TOKEN_TO_BE_REPLACED

Under the heading of ‘What can go wrong, will go wrong’, the last 12 hours have been interesting. It felt a little like we were Tina Fey and Steve Carell in the movie ‘Date Night’. How can so many things stack up against you? We were spending a quiet evening at home watching ‘Drunk History’ … END_OF_DOCUMENT_TOKEN_TO_BE_REPLACED

I’ve been told I have a ‘Justice Complex’. But I figure if there is one complex to have, justice is not a bad one. And if there’s one thing I can’t stand it’s bullies and boundary-crossers. People who think it’s OK to intentionally make other people’s lives less wonderful, and sometimes much harder, than they need to be. And I just won’t have it. END_OF_DOCUMENT_TOKEN_TO_BE_REPLACED

When we moved to Valencia, everything was different. I felt so bombarded by the differences that any subtlety or shades of grey were completely missed. The things we were dealing with were all primary colors and right in our faces. Now that we’ve lived in Spain for 16 months, I notice other things. Jeff talked … END_OF_DOCUMENT_TOKEN_TO_BE_REPLACED

Before living here, Spain and artistic patronage weren’t something I connected. But this is due only to my own ignorance and inexperience, because I was completely wrong. And I’ve spent the better part of the last few month disavowing myself of my previous prejudices. Sure, I’d been to the Dali museum in St. Petersburg, FL. And I’d been to the Sagrada Familia and seen more of Gaudi’s work in Barcelona. But it was all disconnected. Now I’m putting it together for myself, and it’s been an educational journey. 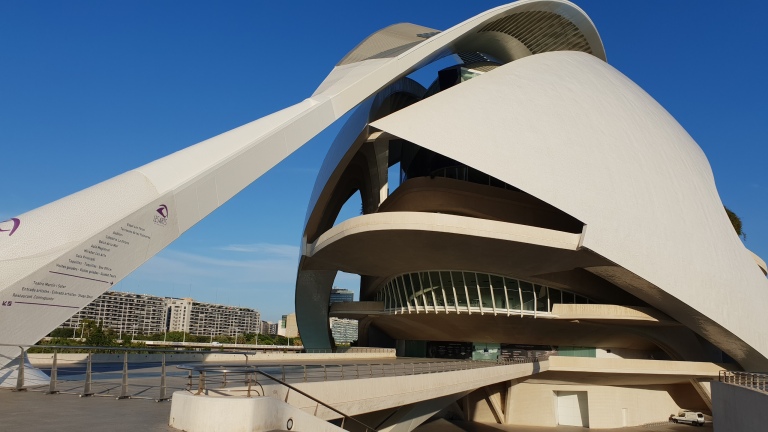 Yesterday, I went with some friends to tour the Palau de les Arts Riena Sofia – or the Queen Sofia Opera House. This stunning piece of architecture, designed by Valencian Santiago Calatrava, sits in the City of Arts and Sciences and is the jewel in it’s crown. A fitting description because the building is meant to depict a classical Grecian helmet – ala Sparta. And it does just that.  And the City of Arts and Sciences is a marvel that puts Valencia right up there with some of the great architectural jewels in the Spanish crown.

The building is constructed of white concrete and it reflects the light of the Valencian sun. It sits in pools of blue water, that make it appear to be floating up on a beach after battle. the ‘feather’ that anchors the helmet to the ground is a cantilever that supports the weight of the entire structure with just one piece that attaches to the center of the roof of the building. To say it’s bold doesn’t do it justice. To say its a work of art is just stating the obvious.

Placido Domingo – the famous tenor – has a special relationship with the company and every year he comes and selects 10 students who apply from all over the world to study there for free. I loved hearing how they not only put on world class operas but also support the next generation of artists. Next to the Opera House is the Berklee School of Music (think Boston) – it’s their only campus outside of the US. Students come to study in Valencia for a year and soak up the culture. They use the smaller halls and auditoriums in the Opera House to put on nearly free concerts all throughout the year. 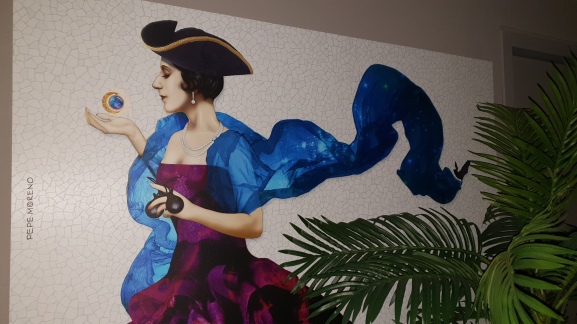 The building itself incorporates elements indicative of Valencia. Ceramics are everywhere. The building is tiled in locally made tiles and the door handles are classical images of male and female made by local ceramic houses. 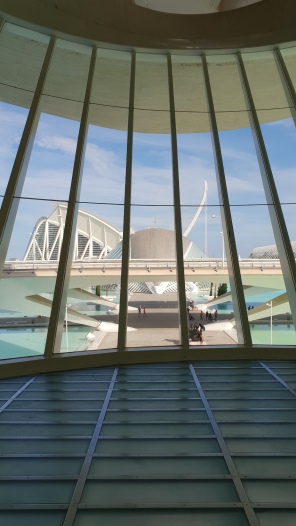 The acoustics in the main hall are considered perfect and the large auditorium is second only to the Met in NYC for it’s size and the number of people it can accomodate for a performance. Its seats each have a screen that allows the patron to select the language they wish to use for translating the particular opera. Thereby accommodating anyone who decides that Carmen or La Taviata are a must see, but have no idea what the performers are saying.

The peace of the building, and the calm of the cafe experience on the deck by the pools afterwards were interrupted as I was trying to catch a taxi at the circle on Carrer de l’Alicaide Reig. One woman in a car, cut off a guy in the circle and he slammed on his brakes, and was promptly rear ended by the car behind him in a serious deal. I don’t think anyone was hurt because they all jumped out and started fighting with each other.  And the upside is that I learned some new swear words and that apparently it’s perfectly ok to bang on the windows of other people’s cars while traffic is whizzing by, just to get their attention. Luckily, a taxi pulled up and I hopped in to avoid the fray. Just another day in Paradise.