Jeff needed to head to Cordoba to pick something up. Something that couldn’t be shipped. And he asked me if I wanted to tag along. Heck yeah! Being an American, and that long road trips are in our DNA, I had my bag packed in 5 minutes and was waiting by the front door at … END_OF_DOCUMENT_TOKEN_TO_BE_REPLACED

Today was a day. A monumental day. Jeff got the vaccine. And we did a few other things, too. It started out early, and only 6 hours later we were home again. I like to be early to things. To me, being late is disrespectful and just plain dumb. The early bird catches the worm. … END_OF_DOCUMENT_TOKEN_TO_BE_REPLACED

Under the heading of ‘What can go wrong, will go wrong’, the last 12 hours have been interesting. It felt a little like we were Tina Fey and Steve Carell in the movie ‘Date Night’. How can so many things stack up against you? We were spending a quiet evening at home watching ‘Drunk History’ … END_OF_DOCUMENT_TOKEN_TO_BE_REPLACED

I’ve been told I have a ‘Justice Complex’. But I figure if there is one complex to have, justice is not a bad one. And if there’s one thing I can’t stand it’s bullies and boundary-crossers. People who think it’s OK to intentionally make other people’s lives less wonderful, and sometimes much harder, than they need to be. And I just won’t have it. END_OF_DOCUMENT_TOKEN_TO_BE_REPLACED

When we moved to Valencia, everything was different. I felt so bombarded by the differences that any subtlety or shades of grey were completely missed. The things we were dealing with were all primary colors and right in our faces. Now that we’ve lived in Spain for 16 months, I notice other things. Jeff talked … END_OF_DOCUMENT_TOKEN_TO_BE_REPLACED

I couldn’t love our neighborhood more. Seriously. It reminds me of living in San Francisco in the early 90’s and in Seattle’s Belltown in the mid 90’s. In San Francisco in the Haight or in the Aves, you could catch Robin Williams working out new material in one club or another. In Seattle, you could catch Nirvana or Pearl Jam at the Crocodile for nothing when they were working on new songs.

Benimachlet has that same vibe, sans the famous people but I love it nonetheless. I sent Jeff to make hair appointments for us at our local hair salon. I figured his Spanish is good enough to work through it.  He sent me a photo of this post it. He is now officially El Jefe (‘The Boss’ in Spanish) and I am just ‘Keli’ since ‘Kelli’ would mean my double ‘L’s’ would be pronounced totally incomprehensibly. So it’s The Boss and Keli. 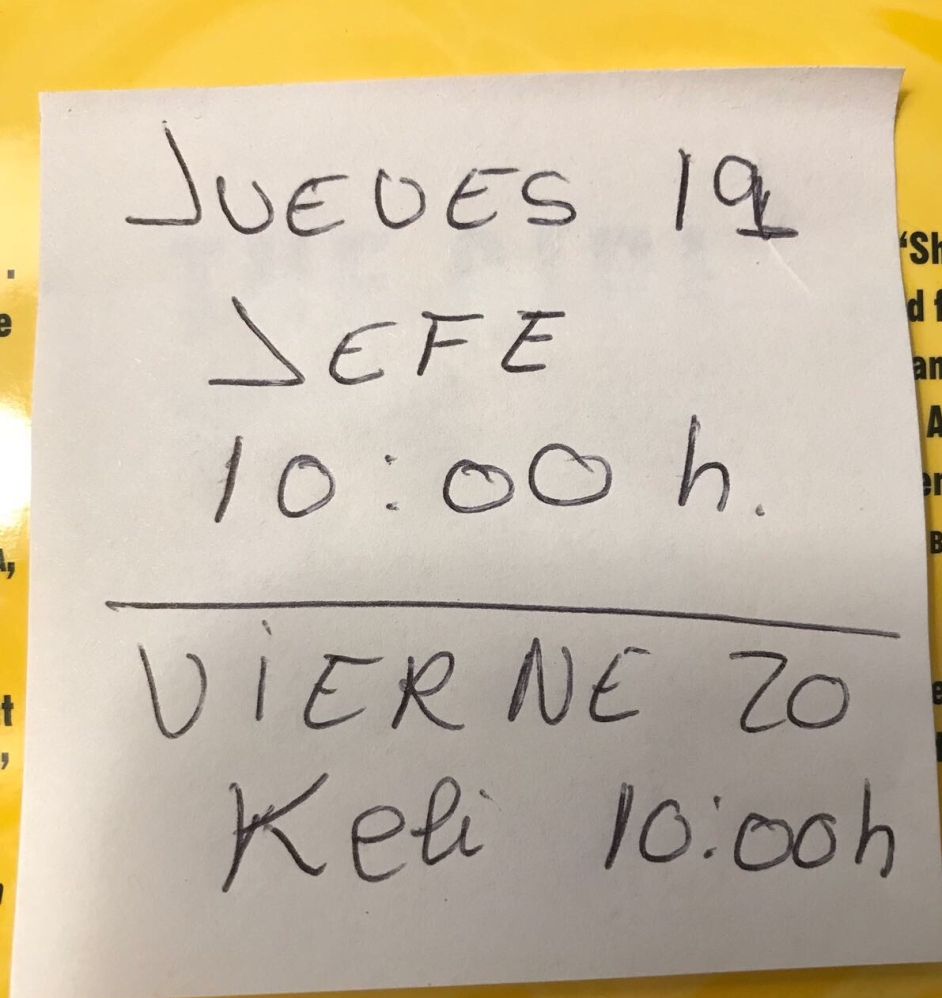 Tonight, Sunday night, El Jefe and I went out in our neighborhood to have a drink and some tapas. Even on a Sunday evening there is alot going on in the square around our local church. A wedding had just finished and the revelers were in front of the church with their families.

We stopped for some wine at our favorite watering hole. We were there the day they first opened so we try to give them our custom whenever possible. But we got hungry and they don’t have a menu that was commiserate with our level of hunger. we went through the square on our way to another of our favorite tapas bars. On the way, we found a group spontaneously dancing. Not an organized thing, since when we walked home behind the folks with the speaker and the music, it was clear it was just a ‘lets turn on some music and see what happens’ type of deal. The crowd was loving it and readily joined in. Seeing dancers on the street in Valencias isn’t that unusual.

I love our tapas place. The owner is an old hippie and the food is top notch. The price of the cerveca and vino blanco are to our liking, as well. The place is cool and he totally digs us, so it’s fun to go there. The service isn’t typically hands off and it’s easy to get another drink and we feel at home.

On the way home, we went around our summer outdoor theatre in front of the church. ‘Cinema a la Fresca’ enjoyed by all in the neighborhood on a Sunday night. We love the home grown eclectic vibe and the spectrum of folks who gather to enjoy a good film on a warm summer night. Back home, we used to go to Chateau St. Michelle and the Red Hook Brewery in Woodinville, WA with our kids in the summer to enjoy family movies outdoors. These are more arthouse films, but it’s no less enjoyable.

Afterwards, walking back we passed by a shop front with an open door. A group of neighborhood gentlemen were beginning a game of dominos. We see this everywhere in the evenings around our apartment. Groups of older guys playing dominoes for money in cafes or parks. It serious business here. But this group was a fun and friendly bunch who was happy to share a ‘Guapa!’ as I took their photo.

Before we moved to Valencia, I would never have believed we would live in a neighborhood like this. But every day, every time I turn a corner, I’m glad we chose to land here.

When I went to my hair appointment on Friday morning, I had a conversation with my neighborhood hairdresser, Pili, in Spanish. It wasn’t pretty, but she was so surprised at the progress I made, her enthusiasm for my particular brand of Spanish was infectious and made me feel proud of how far I’ve come. And then she threw me a curveball. Benimaclet is a very traditional Valencian neighborhood. People here DO NOT speak English so it’s easy to practice Spanish. But they also speak ‘Valenciano’ – which is another language entirely. Much like Catalan. And Pili is determined that I learn that too, so she’s coaching me. But the biggest compliment she gave me is that my pronunciation is ‘like a Valencian’, which I have been told before, so I’m on the right track.  I think we’ve found out home in Benimaclet. And, as everyone knows,  there’s no place like home.