Jeff needed to head to Cordoba to pick something up. Something that couldn’t be shipped. And he asked me if I wanted to tag along. Heck yeah! Being an American, and that long road trips are in our DNA, I had my bag packed in 5 minutes and was waiting by the front door at … END_OF_DOCUMENT_TOKEN_TO_BE_REPLACED

Today was a day. A monumental day. Jeff got the vaccine. And we did a few other things, too. It started out early, and only 6 hours later we were home again. I like to be early to things. To me, being late is disrespectful and just plain dumb. The early bird catches the worm. … END_OF_DOCUMENT_TOKEN_TO_BE_REPLACED

Under the heading of ‘What can go wrong, will go wrong’, the last 12 hours have been interesting. It felt a little like we were Tina Fey and Steve Carell in the movie ‘Date Night’. How can so many things stack up against you? We were spending a quiet evening at home watching ‘Drunk History’ … END_OF_DOCUMENT_TOKEN_TO_BE_REPLACED

I’ve been told I have a ‘Justice Complex’. But I figure if there is one complex to have, justice is not a bad one. And if there’s one thing I can’t stand it’s bullies and boundary-crossers. People who think it’s OK to intentionally make other people’s lives less wonderful, and sometimes much harder, than they need to be. And I just won’t have it. END_OF_DOCUMENT_TOKEN_TO_BE_REPLACED

When we moved to Valencia, everything was different. I felt so bombarded by the differences that any subtlety or shades of grey were completely missed. The things we were dealing with were all primary colors and right in our faces. Now that we’ve lived in Spain for 16 months, I notice other things. Jeff talked … END_OF_DOCUMENT_TOKEN_TO_BE_REPLACED

As we count down Emilie’s last couple of weeks here in Spain for the summer, we have been playing tourists. Not so many museums and more of the organized amusements that someone under the age of 18 might enjoy. Last week was the Oceanographic. Today was the BioParc. Last weekend we had gotten a coupon as a ‘two for one’ when we checked out at the local Carrefour. So it seemed like someone was telling us we needed to include the experience in our end of summer agenda.

I’ve never loved zoos. Even as a small child I didn’t like that animals were in cages instead of where they belonged in the wild. I remember my Mom telling me zoos were good because otherwise people where we lived wouldn’t care about animals in Africa or the Arctic. There is a certain logic there. But it still made me sad to watch animals pacing around in small cement cages in the Portland or San Diego zoo in the 1970’s.

But the BioParc in Valencia is something all together different. Yes, the animals are locked up. But the design of the enclosures is masterful. They’re large and none of the animals are walking on cement. It’s designed to mimic their natural spaces from the surfaces to the plant life and each area is replete with animals that naturally live together.

The focus of the park is Africa – such a close neighbor that our discussions immediately turned to planning a trip south as we wandered about. There would be no animals that shouldn’t live at the latitude we are at, or in the climate. When you enter, you cross a bridge that isolates the exhibits. It’s surrounded by water so it requires less fencing and hard barriers. Then you head down into the park and the first exhibit blows your mind. Walking through two separate doors to keep the animals in, you find yourself walking with lemurs.  They are everywhere, in the trees, at your feet, playing on the grass. They come up to you and you have to try very hard to maintain a safe distance. 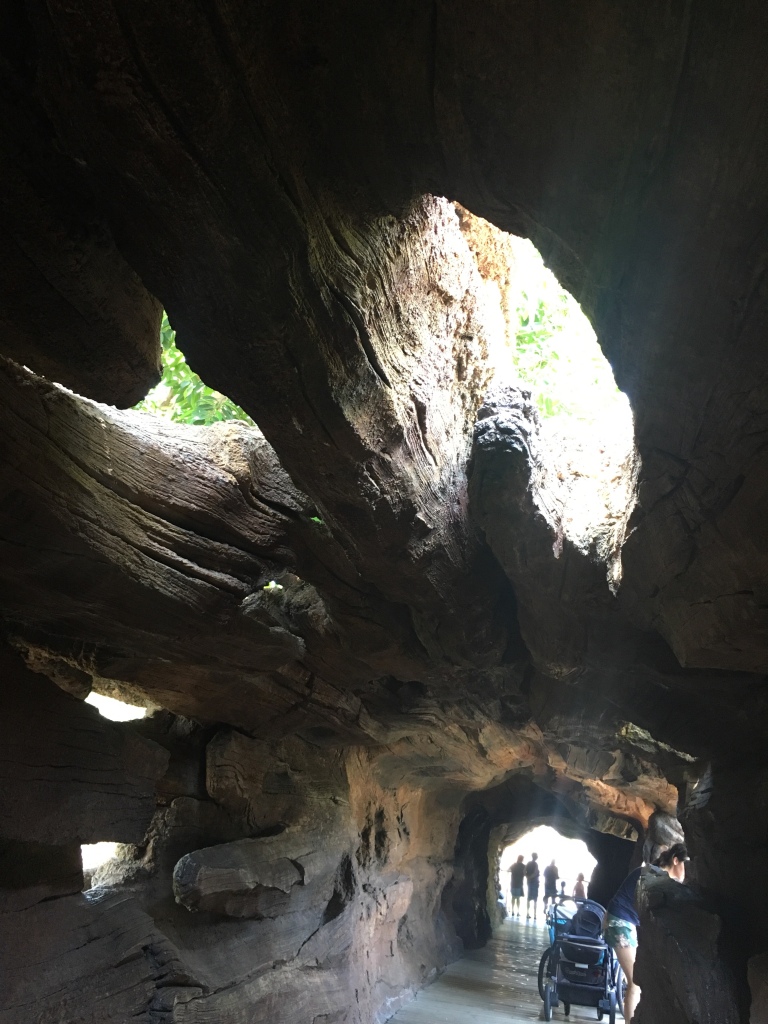 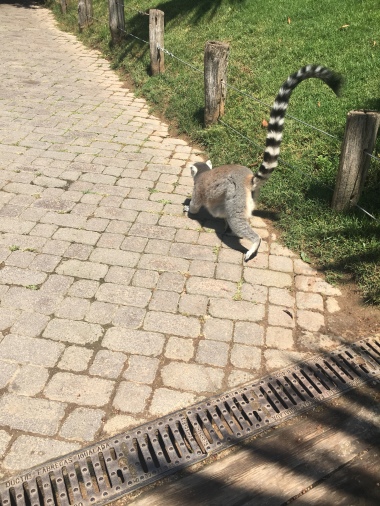 Moving through the exhibits is so seamless, you hardly know where one ends and another begins. The flowing water from the cheetah exhibit filled with crocodiles is the pools where the hippos soak in the hot sun amongst brightly colored fish that swim from gaves into the water around them. 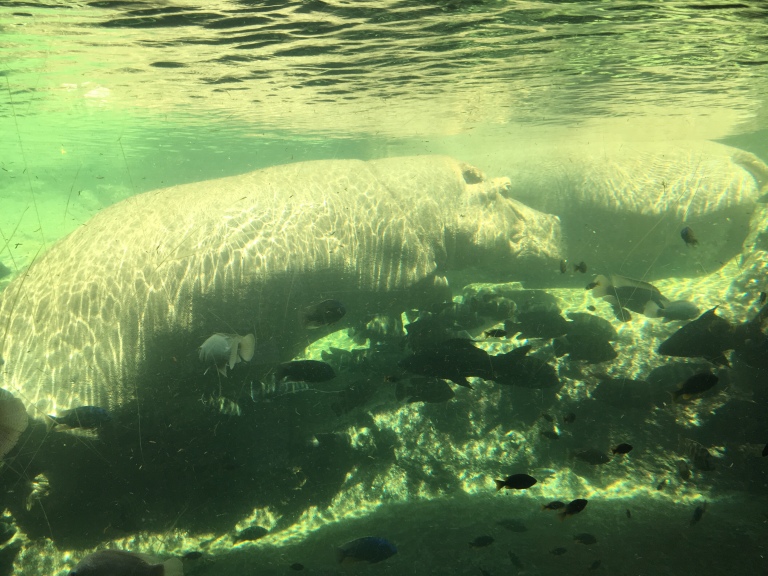 The gorillas were amazing. But it still makes me sad to see these incredible animals locked up. Looking into their faces that looks so much like us, it’s hard not to assign your own emotions to them as they look through the glass into your face.

Meerkats play and sleep in the enormous elephant enclosure with multiple levels and areas for them to explore. Running water is everywhere and they drink and play in a much more natural environment that other Elephant exhibits I’ve seen. 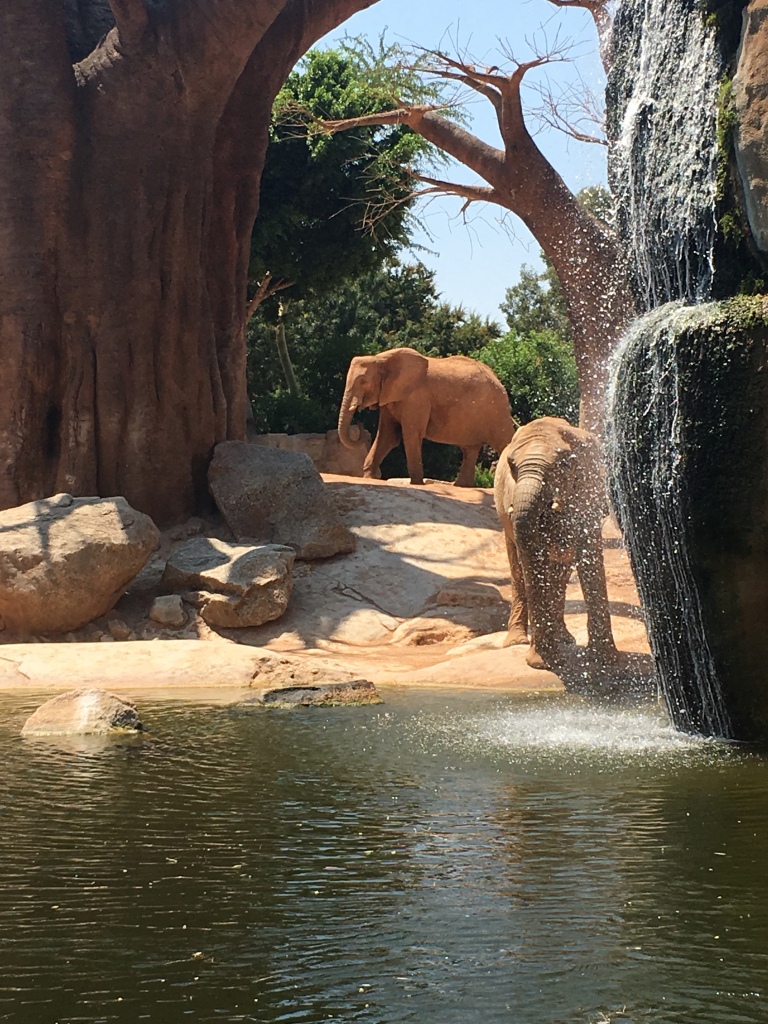 The lone lion pride with his only male lion were mostly asleep until he got up and stirred up the pride. He looked like he’d recently been in a bit of a scuffle and was a little worse for wear. 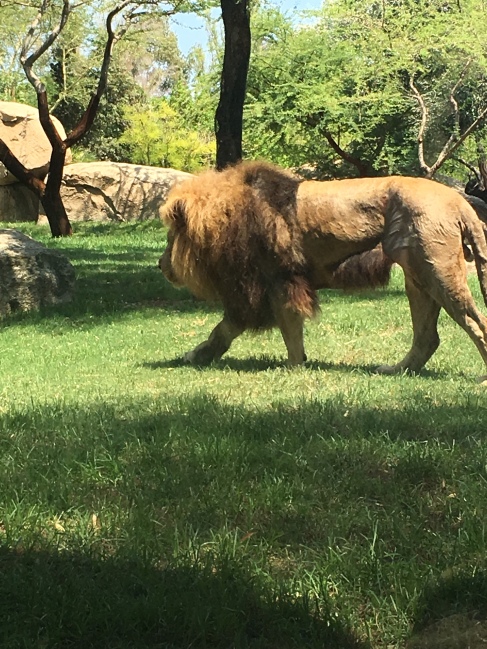 The design of the Rino enclosure was masterful. The Viewing platform had a small fence that gave you the impression that these gigantic animals could come and gore you at any moment, if not for the deep water barrier directly at your feet. That and the baby Zebra was a highlight of the day. 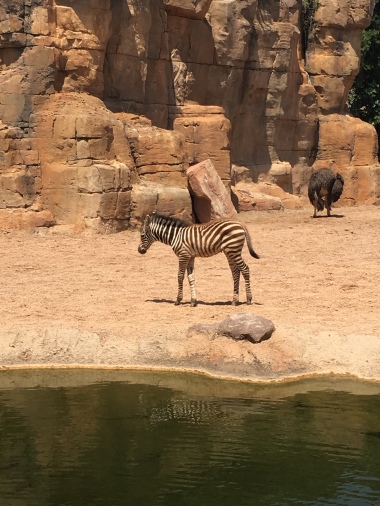 We didn’t stop smiling the entire day. And on the way home we walked through the adjacent park where you can rent swan boats on a day that isn’t 36 degrees. Maybe in the fall. 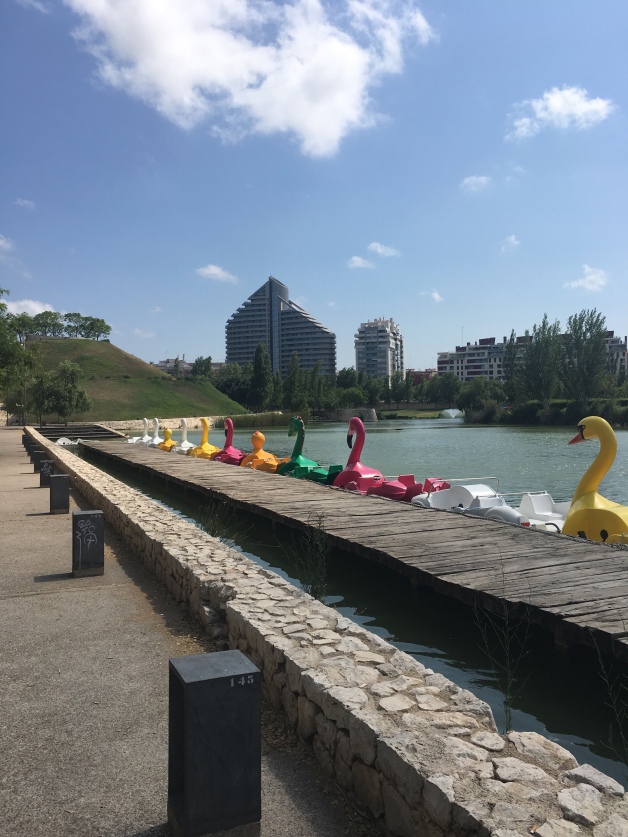 I don’t think we’ll go back again any time soon, unless someone with small kids pays us a visit. But I’m glad we spent the day there as a family today.