Jeff needed to head to Cordoba to pick something up. Something that couldn’t be shipped. And he asked me if I wanted to tag along. Heck yeah! Being an American, and that long road trips are in our DNA, I had my bag packed in 5 minutes and was waiting by the front door at … END_OF_DOCUMENT_TOKEN_TO_BE_REPLACED

Today was a day. A monumental day. Jeff got the vaccine. And we did a few other things, too. It started out early, and only 6 hours later we were home again. I like to be early to things. To me, being late is disrespectful and just plain dumb. The early bird catches the worm. … END_OF_DOCUMENT_TOKEN_TO_BE_REPLACED

Under the heading of ‘What can go wrong, will go wrong’, the last 12 hours have been interesting. It felt a little like we were Tina Fey and Steve Carell in the movie ‘Date Night’. How can so many things stack up against you? We were spending a quiet evening at home watching ‘Drunk History’ … END_OF_DOCUMENT_TOKEN_TO_BE_REPLACED

I’ve been told I have a ‘Justice Complex’. But I figure if there is one complex to have, justice is not a bad one. And if there’s one thing I can’t stand it’s bullies and boundary-crossers. People who think it’s OK to intentionally make other people’s lives less wonderful, and sometimes much harder, than they need to be. And I just won’t have it. END_OF_DOCUMENT_TOKEN_TO_BE_REPLACED

When we moved to Valencia, everything was different. I felt so bombarded by the differences that any subtlety or shades of grey were completely missed. The things we were dealing with were all primary colors and right in our faces. Now that we’ve lived in Spain for 16 months, I notice other things. Jeff talked … END_OF_DOCUMENT_TOKEN_TO_BE_REPLACED

We’re Spanish now. At least during the World Cup. Our team has made it to the top 16 and we’ve been with them the whole way. We haven’t watched any of the matches in the same place twice and experiencing the spectrum of venues from gritty to a little more swanky, and the crowds that frequent them, has been fun!

Last night we went to San Remo on Carrer de Salamanca. It’s a little more upscale and they had TV’s in the windows so we could sit outside and watch Uruguay v. Portugal. I must say, I took great pleasure watching Cristiano Renaldo stopped from interfering with our road to World Cup glory.  Yes, I know it’s a long shot for the Spanish team, but Portugal tied us in the first game so I’m happy to seem them go. And Uruguay’s play was impressive. 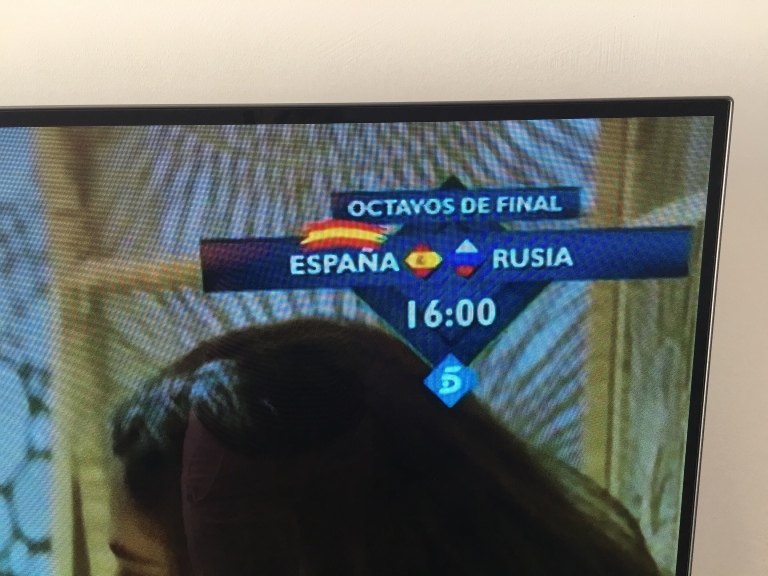 Afterwards, we went around the corner and ate at our favorite Mexican restaurant, Guacamole, so the evening couldn’t have been better. Today, it’s a different story. Spain is playing Russia at 4pm CET local time. Normally, I wouldn’t care so much who our opponent was. I mean, we just need to beat them. But then I got a WhatsApp message from Ryan, our oldest.

Ryan lives in Boulder and his girlfriend is Russian. They’re both studying for their Phd.’s and we really like her alot. But this is sports, after all. All bets are off in the World Cup. He asked who we were going to cheer for. I told him ‘Spain, of course.’ And I indicated in the strongest possible terms that he should consider doing nothing other than that himself – even though the person who shares his house, and his heart, is on the other team (so to speak).

He asked me if we couldn’t just be happy that both teams had gotten so far in the tournament and celebrate that? I laughed – OMG! Who did he think he was talking to? This is the World Cup. There will be no quarter given. OK, I did make one concession. I agreed I will not shout expletives at the TV when Russia fouls us or fakes an injury – like I did during the Portugal game in a crowded bar – much to Emilie’s chagrin.

Her embarrassment will be kept to a minimum today. We are going to watch the game today from home. We have snacks, drinks and are ready to go. The marching bands in the neighborhood will start around 3pm. The pre-game fireworks are assured. Counting down to the moment of glory when we will crush the Russians! Well, just beat them in the final 16, anyway. But if Spain makes it to the quarter finals the city will go crazy. And in investment of a jersey might be in our futures.