Sure, I like ancient stone walls. Thick beams that might be from trees felled centuries ago. In theory. But I also like a couple of other things. Like a driveway I could drive a car down without bush-wacking to the front door. And speaking of a front door, I’d like to get into it without peeling back vines, kicking the wood to loosen the tricky church-key lock, and ducking – like a Hobbit. END_OF_DOCUMENT_TOKEN_TO_BE_REPLACED

The mistress of travel has not been kind to me. Although there were minimal delays this trip back to Valencia from Portland, mostly because American Airlines wasn’t involved, her twin demons, Jet-lag and Chatty Seat-mate, did their worst. I knew I should have taken the paid Business Class upgrade when it was announced in Seattle. … END_OF_DOCUMENT_TOKEN_TO_BE_REPLACED

I’ve been told I have a ‘Justice Complex’. But I figure if there is one complex to have, justice is not a bad one. And if there’s one thing I can’t stand it’s bullies and boundary-crossers. People who think it’s OK to intentionally make other people’s lives less wonderful, and sometimes much harder, than they need to be. And I just won’t have it. END_OF_DOCUMENT_TOKEN_TO_BE_REPLACED

Jeff will be starting his journey home from the US while I’m stepping onto a train to leave Valencia. So he’ll be at home waiting while I’m seeing the sights in Barcelona. But I don’t care so much about that. I’m glad he’ll be there waiting, because we’ve hit critical mass on him being away and I’m sort of stuck without him. END_OF_DOCUMENT_TOKEN_TO_BE_REPLACED

We are home from Morella. Just pulled in after a long weekend of new sights, new sounds and ALOT of ground covered. Morella is north of Valencia by about 2 hours on a motorcycle. I’ve been interested in Spanish prehistoric cave painting for decades and I’ve never indulged in taking the time to seek them … END_OF_DOCUMENT_TOKEN_TO_BE_REPLACED

More than 10 years ago I found out I couldn’t eat chicken eggs, amongst a few other things. Apparently I have developed some sort of allergy. I was born on a chicken ranch in southern California. My parents had 10,000 chickens in a big egg operation, before they packed it in and moved to Oregon. So it seems I was rejecting my roots somehow. My Dr. at the time, told me that he had found some of his patients could eat duck eggs instead, but that I would need to be very careful in testing out that potential. I love eggs, so I did, and I was fine.

Finding duck eggs on a regular basis, however, was a challenge. I went on an exhaustive search and finally found a farm in the mountains east of Seattle that was run by two ex-Microsofties who had decided to cash in their stock options, before the 2008 crash, and use their millions to purchase and mountainside, run a water fowl egg operation, and sell those rarest of shelled jewels to the poshest restaurants in Seattle. I didn’t get how software development translated into the dream of farming, but you see, apparently – as I have learned – the best sous chefs and pastry chefs in the finest culinary establishments in the world use duck eggs to make their creations creamy and fluffy, and their sauces rich. And they’ll pay a premium for the pleasure.

So I reached out to them, drove up their mountain on a scary road, and we had a chat. After hearing my story, they committed that they would keep back two dozen duck eggs for me each month, provided I told no one where I was getting them from. And I would drive out there and pick them up and pay through the nose for them. So yes, I had a secret duck egg dealer of my very own.

But, you see, ducks like warm weather and that means that while in the Summer and early fall, eggs will be plentiful – if you can locate a source. In the Winter and early Spring, not so much. So having a chicken egg allergy in WA State meant that sometimes, because my Microsoftie duck dealers were purists without heated pens or barns, that their feathered friends sometimes wouldn’t lay for weeks at a time. So no duck eggs for the girl at the short end of the stick during coat weather.

In Arizona, I found an Asian food market 30 miles away from our house and I would drive the 60 mile round trip to get a couple dozen, packing them in a cooler so keep them safe and cold for the drive home. I made that trip every month and I was thrilled because they always had eggs, so I never left there empty handed.

Now that we live in Valencia, it’s been over three months since I had a duck egg. I used to make an omelet with one egg each morning, adding a little water to stretch the egg and to fluff it up. I savored that omelet. It was part of my morning routine – for years. But I haven’t found duck eggs here. And I have tried. 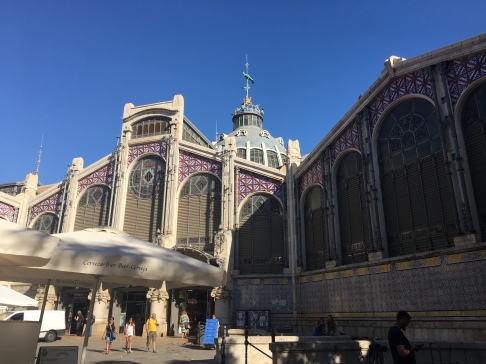 Today I went back to the Mercat Central with Jeff. I have been there before searching for my eggs, but I always got there later in the day and the stalls for eggs were picked over. Today, we got there when they were opening up at 7 am. The Mercat Central is one of the largest ‘Open Air’ markets in Europe. Even though it’s covered in a stunning glass and tiled structure that is something to behold. It’s a listed building and is art unto itself. They carry everything a foodie might want. It’s actually an assault to the senses, with the fruit, fish, meats of every type, flowers and spices. I LOVE IT! 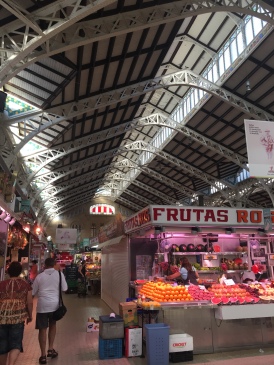 We walked the aisles and I inquired at many of the stalls about ‘huevos de pato’ and where we might find them in the market. I was instructed on who to talk to and they sent me deeper into the maze, but without success. We finally bought some saffron and some fresh cardamon I had been needing and went in search of coffee. No duck eggs for me today.

When we got home, Jeff did an exhaustive search online and we may have found a farm south of the city, situated in the rice fields, that has exotic birds, including peacocks, and via Chrome’s translation feature, appears to have duck eggs. Don’t worry, I’m not eating peacock eggs. So I reached out to them and asked if I might purchase duck eggs from them – and commit to doing so – on a regular basis. I’m just awaiting their reply.

Just the very idea of finding another duck egg source has brightened my day. And the 40 km round trip will be worth it every time. I want one so badly I’ll pay a euro a piece for the privilege. I just gotta find a Duck Guy.

3 thoughts on “The Search for the Duck Guy”

Scroll to Top
The Camino Provides