Jeff needed to head to Cordoba to pick something up. Something that couldn’t be shipped. And he asked me if I wanted to tag along. Heck yeah! Being an American, and that long road trips are in our DNA, I had my bag packed in 5 minutes and was waiting by the front door at … END_OF_DOCUMENT_TOKEN_TO_BE_REPLACED

Today was a day. A monumental day. Jeff got the vaccine. And we did a few other things, too. It started out early, and only 6 hours later we were home again. I like to be early to things. To me, being late is disrespectful and just plain dumb. The early bird catches the worm. … END_OF_DOCUMENT_TOKEN_TO_BE_REPLACED

Under the heading of ‘What can go wrong, will go wrong’, the last 12 hours have been interesting. It felt a little like we were Tina Fey and Steve Carell in the movie ‘Date Night’. How can so many things stack up against you? We were spending a quiet evening at home watching ‘Drunk History’ … END_OF_DOCUMENT_TOKEN_TO_BE_REPLACED

I’ve been told I have a ‘Justice Complex’. But I figure if there is one complex to have, justice is not a bad one. And if there’s one thing I can’t stand it’s bullies and boundary-crossers. People who think it’s OK to intentionally make other people’s lives less wonderful, and sometimes much harder, than they need to be. And I just won’t have it. END_OF_DOCUMENT_TOKEN_TO_BE_REPLACED

When we moved to Valencia, everything was different. I felt so bombarded by the differences that any subtlety or shades of grey were completely missed. The things we were dealing with were all primary colors and right in our faces. Now that we’ve lived in Spain for 16 months, I notice other things. Jeff talked … END_OF_DOCUMENT_TOKEN_TO_BE_REPLACED

We are still discovering our new home town. Turning right instead of left, like we usually do. Looking up to find that we’ve been walking under some gorgeous, carved stone work we had failed to see before. It happens every day. Sometimes, we do it deliberately. Other times it’s by accident. We’re just lost. But getting lost is fun too.

I use Google maps a lot. Not just to orient my path on a particular walk, but to determine were we are in relationship to other things we are familiar with. Like playing the video game, The legend of Zelda, the map starts to reveal itself and we are expanding our range. It’s invaluable in finding restaurants and about a thousand times better than Apple maps that recently put something I was looking for out into the middle of the harbor. My finely tuned intuition told me that might be incorrect.

Eating in any city, for me, can provide challenges. I have to be gluten-free, not by choice, in a country that is the number one bread producer anywhere. I can smell it and there is a bakery on every corner, causing me to salivate. It’s hard and it doesn’t seem fair – but there you go. Life’s not fair, so I just deal. But for GF types like me, Spain is a pretty good place. Every grocery store has ALOT of GF alternatives and they label everything for allergies/celiac so I feel safe eating here. But I still struggle.

The GF gods decided to reward me and throw me a bone. We decided to walk through the middle of an old monastery to cut through from one street to another. We had never gone this way before and I saw a gaggle of nuns, which attracted my attention. I generally like nuns and they always greet us with a nice ‘Buenos dias’ and it makes me feel connected to the community. I’m not Catholic so I have no nun-baggage from my school days, like other people I know.

But I’m not the only one who has found food related uniqueness here. We were walking by a news stand and Jeff stopped for a moment, looked closely at something and then walked on. I know what you’re thinking. It has to be some sort of salacious magazine. I mean, it is Europe and they don’t seem to have the same puritanical ideas about the human body that we do in the US. Just look at the art.

So I circled back and Jeff followed. Since I know him, I was pretty sure it had to do with motorcycles or a sports car of some kind.

‘What were you looking at?’ I asked, scanning the hundreds of choices.

We continued on our way through the old city and came across some things called ‘Eucharist Carriages’. I included some pictures. They’re very old and get refurbished every few decades. Some of them are centuries old and are hand carved and made out of wood. They were just parked in a little spur off the road that skirts the river. A nice security guard was keeping an eye on them. She explained what they were in Spanish and I sort of understood her – which is a miracle and something to celebrate unto itself. 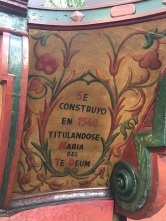 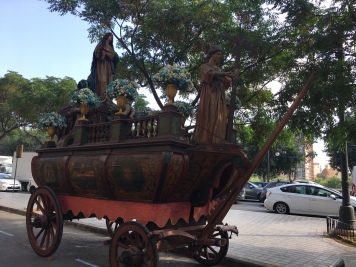 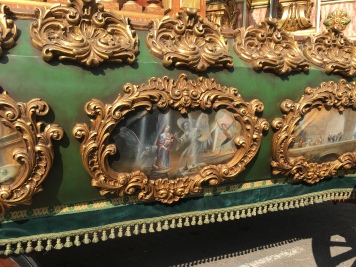 These are waiting for the fiesta for Corpus Cristi to begin, which is coming up in a little over a week marking 60 days after Easter. I’m not sure what the significance of that is, except there will be another Fiesta with fireworks, of course. The person with the corner on the gun powder market here must be a bazillionaire.

Anyway, enjoy. When the fiesta comes around we’ll take snaps of the procession, complete with the new costumes for the masked brides we saw in the windows of some of the local dress shops, and share them here. Time to break out more of those fancy dresses and march down the street again. Along with the folks with the giant head masks and a lot of incense. And the crowds will be epic.  Just another day in Spain.