Jeff needed to head to Cordoba to pick something up. Something that couldn’t be shipped. And he asked me if I wanted to tag along. Heck yeah! Being an American, and that long road trips are in our DNA, I had my bag packed in 5 minutes and was waiting by the front door at … END_OF_DOCUMENT_TOKEN_TO_BE_REPLACED

Today was a day. A monumental day. Jeff got the vaccine. And we did a few other things, too. It started out early, and only 6 hours later we were home again. I like to be early to things. To me, being late is disrespectful and just plain dumb. The early bird catches the worm. … END_OF_DOCUMENT_TOKEN_TO_BE_REPLACED

Under the heading of ‘What can go wrong, will go wrong’, the last 12 hours have been interesting. It felt a little like we were Tina Fey and Steve Carell in the movie ‘Date Night’. How can so many things stack up against you? We were spending a quiet evening at home watching ‘Drunk History’ … END_OF_DOCUMENT_TOKEN_TO_BE_REPLACED

I’ve been told I have a ‘Justice Complex’. But I figure if there is one complex to have, justice is not a bad one. And if there’s one thing I can’t stand it’s bullies and boundary-crossers. People who think it’s OK to intentionally make other people’s lives less wonderful, and sometimes much harder, than they need to be. And I just won’t have it. END_OF_DOCUMENT_TOKEN_TO_BE_REPLACED

When we moved to Valencia, everything was different. I felt so bombarded by the differences that any subtlety or shades of grey were completely missed. The things we were dealing with were all primary colors and right in our faces. Now that we’ve lived in Spain for 16 months, I notice other things. Jeff talked … END_OF_DOCUMENT_TOKEN_TO_BE_REPLACED

We arrived in Dijon! It was a rather long ride from Strasbourg but we did it. We rode thru the picturesque town of Colmar, ‘Little Venice’ they call it, with their canals and centuries-old architecture.

We had a long way to go so we set off to go over the nearby mountains through a National nature preserve. Before our climb started, we made a pit stop to see the main square in the village of Munster. I think cheese is a big deal to the Munsters (not the same ones from 60’s American TV) because they have attractions around it.

But what I really wanted to see were the storks nesting on the peaks of the Hotel de Ville and the church. It’s pretty amazing how they build such huge nests on the top of nothing. 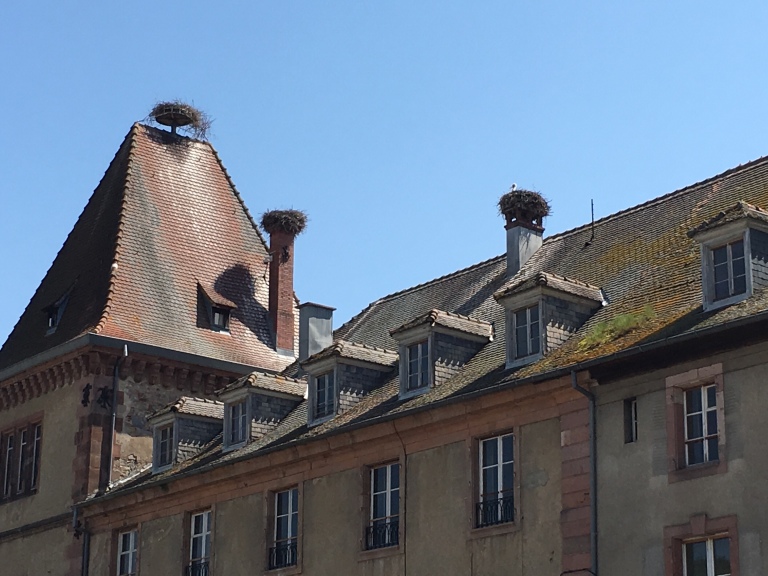 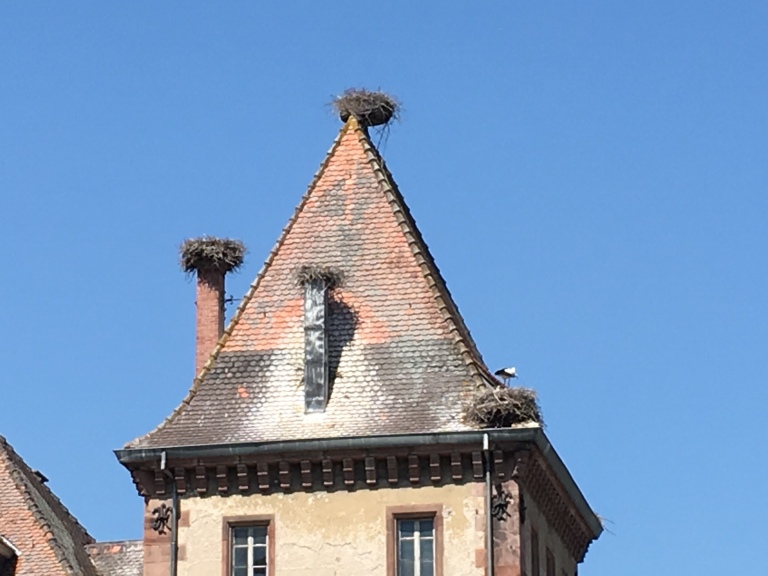 We rode twisty mountain roads for 150 km. A lot of ski areas I’d like to come back to one of these days. And I got to see my first alpine ski jump, sans the snow. But it was still cool. 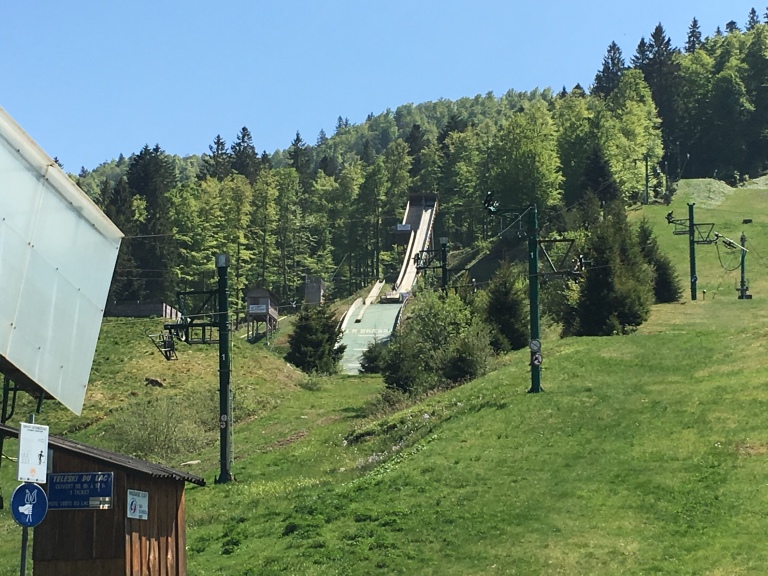 About 30 minutes outside of Dijon we came upon a very old Chateau in the village of Gy. It was built over the course of six centuries and is in a state of delapidated charm. The roof could use some work. I loved it! 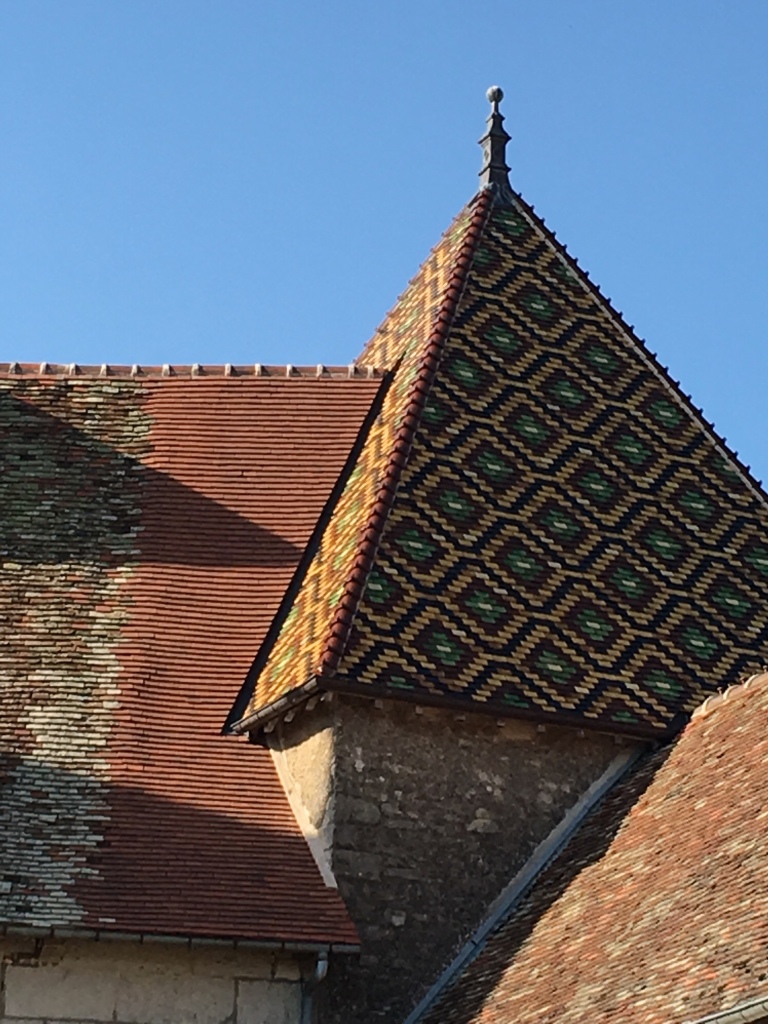 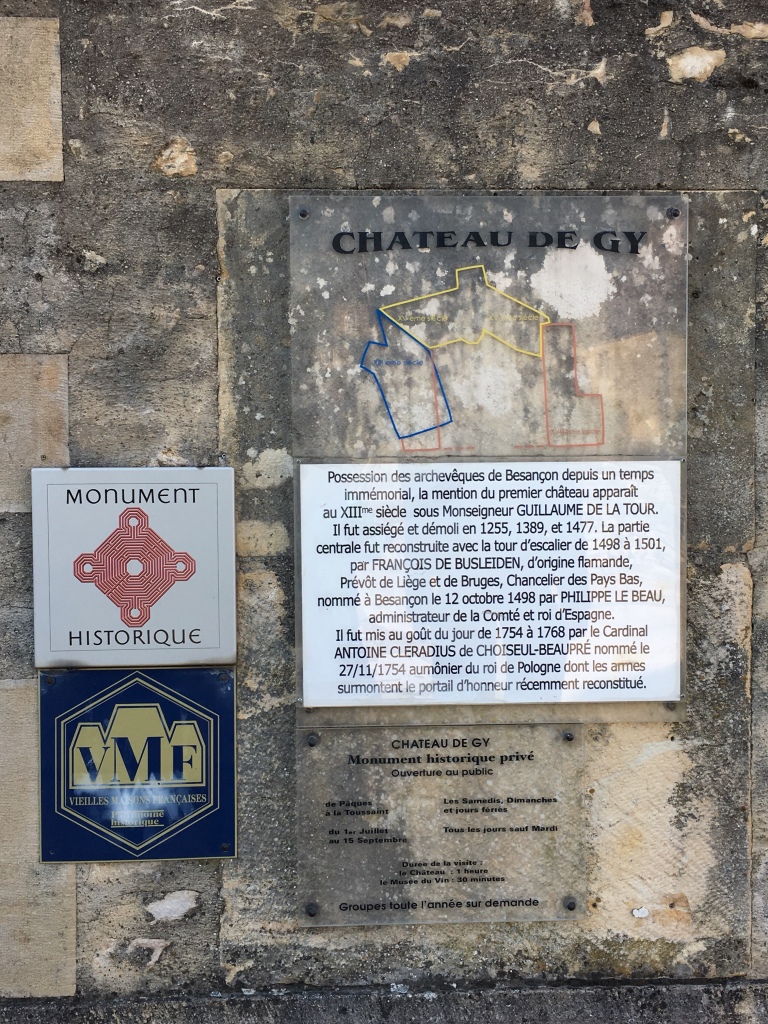 Finally, we made it to Dijon. We are staying in the nicest hotel here. Not because I made the selection. I walked the Camino and slept pallets in churches and bunk houses with 50 other sweaty people for 6 straight weeks in the heat of a Spanish summer. As long as I’m horizontal, I can sleep in the top of a flagpole. Jeff? Yeah, not so much. He’s a bedding snob. If the sheets aren’t a minimum of 600 tc he develops a rash.

So, when I was reading off potential hotels at our last stop on the way to Dijon, he nixed anything that didn’t have the word ‘Grand’ in it. That left one possibility and he knew it. It is weird. He’s not picky about much, but of the few things he is, hotels are at the top.

The concierge ran out when we pulled up. To help with the luggage – such as it was – strapped to our bike. Then he escorted Jeff and Precious to the underground garage, where they locked her up safe and sound in an actual cage. I think Jeff felt vindicated for choosing this hotel because of that alone.

Tomorrow is May 8. It’s the anniversary of the end of WWII and the French flags are flying around town. Stunning walk around the old town. 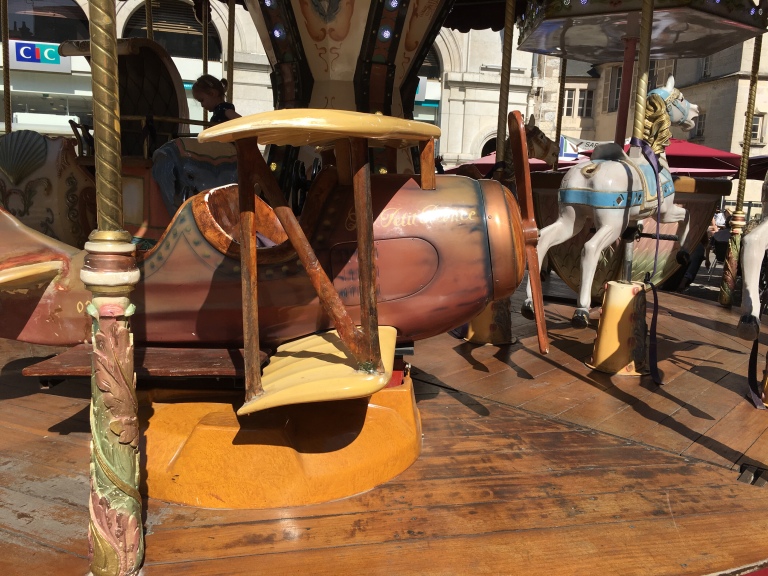 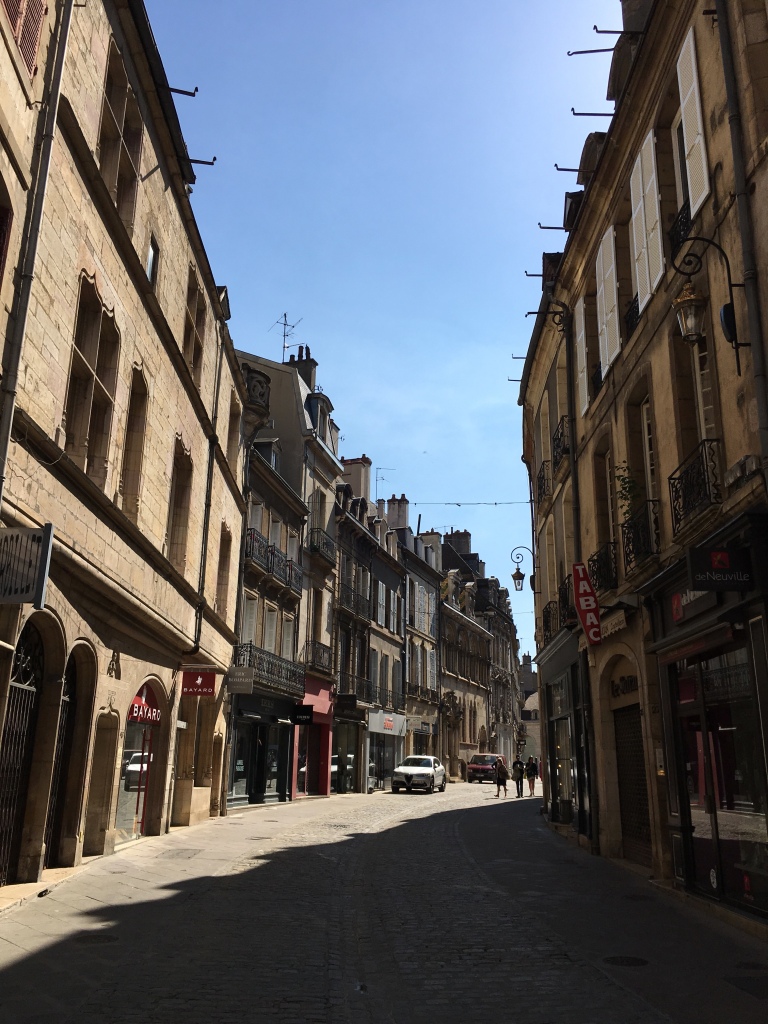 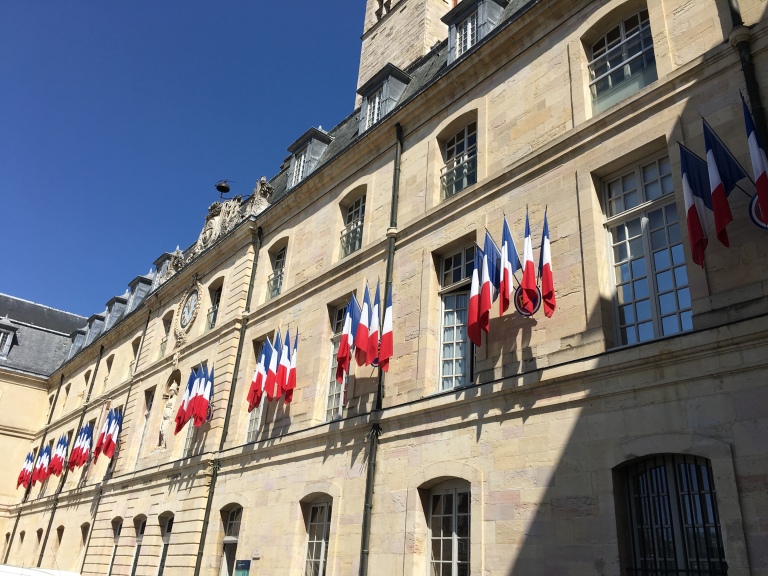 In some places, the building looked very Diagon Alley, rather than Burgundy. But that’s just my own bias.