Jeff needed to head to Cordoba to pick something up. Something that couldn’t be shipped. And he asked me if I wanted to tag along. Heck yeah! Being an American, and that long road trips are in our DNA, I had my bag packed in 5 minutes and was waiting by the front door at … END_OF_DOCUMENT_TOKEN_TO_BE_REPLACED

Today was a day. A monumental day. Jeff got the vaccine. And we did a few other things, too. It started out early, and only 6 hours later we were home again. I like to be early to things. To me, being late is disrespectful and just plain dumb. The early bird catches the worm. … END_OF_DOCUMENT_TOKEN_TO_BE_REPLACED

Under the heading of ‘What can go wrong, will go wrong’, the last 12 hours have been interesting. It felt a little like we were Tina Fey and Steve Carell in the movie ‘Date Night’. How can so many things stack up against you? We were spending a quiet evening at home watching ‘Drunk History’ … END_OF_DOCUMENT_TOKEN_TO_BE_REPLACED

I’ve been told I have a ‘Justice Complex’. But I figure if there is one complex to have, justice is not a bad one. And if there’s one thing I can’t stand it’s bullies and boundary-crossers. People who think it’s OK to intentionally make other people’s lives less wonderful, and sometimes much harder, than they need to be. And I just won’t have it. END_OF_DOCUMENT_TOKEN_TO_BE_REPLACED

When we moved to Valencia, everything was different. I felt so bombarded by the differences that any subtlety or shades of grey were completely missed. The things we were dealing with were all primary colors and right in our faces. Now that we’ve lived in Spain for 16 months, I notice other things. Jeff talked … END_OF_DOCUMENT_TOKEN_TO_BE_REPLACED

Well, not quite yet because we have to ride it across Western Europe to get it home to Valencia. We flew to Frankfurt and made our way down to Heidelberg, where it was waiting for us. Jeff nearly cried when he saw her. It has been nearly 4 months since we dropped her off with stranger in LA.

The guy who imported her for us is a loving steward of all things two wheeled and motorized. He keeps bikes in his workshop on Turkish carpets.

We’ve begun our trek back after some delays in insurance coverage and a part needing to be replaced. But we are on our way now. Our first stop is the Motorcycle Mecca of the Touratech factory store in a small village 3 hours south of Heidelberg. We met a new friend named Rolf there who offered to take us for lunch at a town about 30 minutes away, and we followed this total stranger because that’s what you do. The town is called Wolf and it’s the real deal. 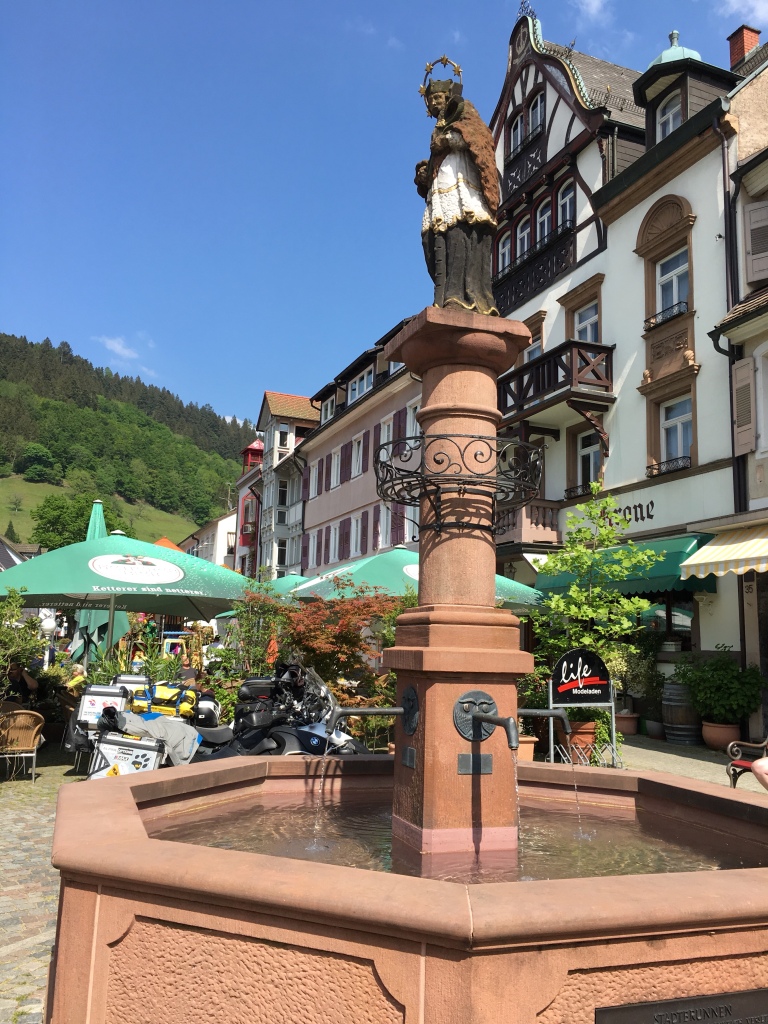 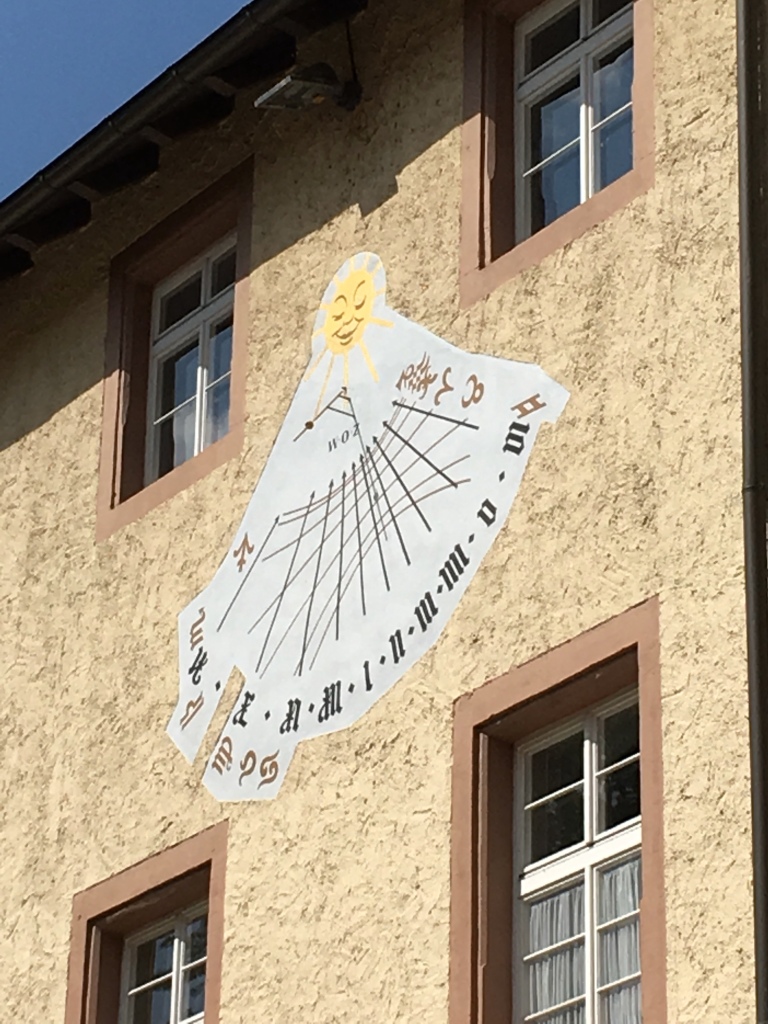 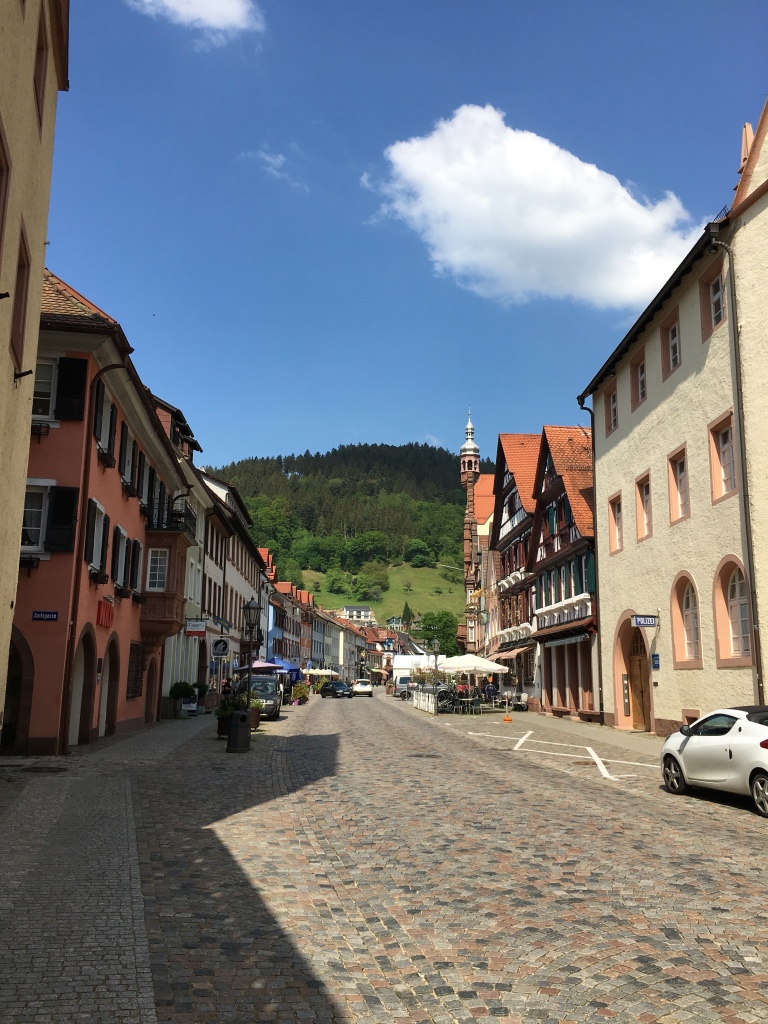 Leavenworth, an ‘I-wish-I-was-the-village-of-Wolf-on-the-edge-of-the-Black-Forest-in-Germany’ kind of place in WA state can only be a pretender. And the other alpine villages were lovely too. We stopped for schnitzel and a beer. What else do you do in a medieval German village? Then we rode up to the top of a ridge line and had some desert. Black Forest cake for Jeff.

Then we rode to Strasbourg in France to stay the night. Strasbourg is right on the border of France and Germany. A Medieval jewel nestled in the Rhine River Valley, it changed hands a lot over the centuries. French, German then French again. More history and culture than can be reasonably absorbed in a brief stop over. But stunning architecture and views.

Next Stop: Dijon! Yes, of mustard fame, near Champagne. Should be a yummy, picturesque ride. But first we need to get over some mountains. Cheers!