Jeff needed to head to Cordoba to pick something up. Something that couldn’t be shipped. And he asked me if I wanted to tag along. Heck yeah! Being an American, and that long road trips are in our DNA, I had my bag packed in 5 minutes and was waiting by the front door at … END_OF_DOCUMENT_TOKEN_TO_BE_REPLACED

Today was a day. A monumental day. Jeff got the vaccine. And we did a few other things, too. It started out early, and only 6 hours later we were home again. I like to be early to things. To me, being late is disrespectful and just plain dumb. The early bird catches the worm. … END_OF_DOCUMENT_TOKEN_TO_BE_REPLACED

Under the heading of ‘What can go wrong, will go wrong’, the last 12 hours have been interesting. It felt a little like we were Tina Fey and Steve Carell in the movie ‘Date Night’. How can so many things stack up against you? We were spending a quiet evening at home watching ‘Drunk History’ … END_OF_DOCUMENT_TOKEN_TO_BE_REPLACED

I’ve been told I have a ‘Justice Complex’. But I figure if there is one complex to have, justice is not a bad one. And if there’s one thing I can’t stand it’s bullies and boundary-crossers. People who think it’s OK to intentionally make other people’s lives less wonderful, and sometimes much harder, than they need to be. And I just won’t have it. END_OF_DOCUMENT_TOKEN_TO_BE_REPLACED

When we moved to Valencia, everything was different. I felt so bombarded by the differences that any subtlety or shades of grey were completely missed. The things we were dealing with were all primary colors and right in our faces. Now that we’ve lived in Spain for 16 months, I notice other things. Jeff talked … END_OF_DOCUMENT_TOKEN_TO_BE_REPLACED

The days seems longer here. I think it’s because they’re so packed with things we’ve never done before. Navigating, learning how to do things and seeing stuff that leaves us in awe.

My day started with grabbing a Valenbisi bike (the best bike service anywhere) and riding 25 minutes to the city center to meet up with some friends, to go out to an area east of the city about 60 miles away. We were going to go for a full day of wine tasting and then lunch – or very late lunch by American standards. I am learning so I ate a very heavy breakfast.

Our first stop was at a winery called Chozas Carrascal. 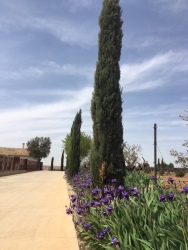 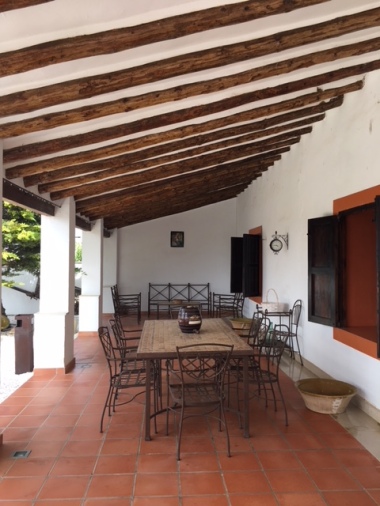 It sits on a plateau about 700 meters above the sea. When it’s cold in Valencia, it can be snowing up there. They have 100 hectres of grapes and 20 hectres of olive groves. A hectre is about 2.5 acres, for those of us unfamiliar with this measurement. They make wonderful wine and excellent olive oil. Both of which, I bought. The wines made at this amazing vineyard are unique in that they have varying special designations (Designation of Origin) as all the grapes in their wines are grown on those 100 hectres of land.

It reminded me so much of Napa Valley or even Eastern Washington state that I was homesick for about a minute. The gentleman who took us around asked me where I was from. I told him I had lived in California wine country for several years. He said he had never been there but had hoped to go someday. I told him he was wrong.

‘Look around. This is exactly like Napa Valley used to be 25 years ago. No crowds and a more simple feel. You have the best of Napa Valley right here. You don’t need to go there, you have this.’

They were lovely people and the tasting and tour were generous. At one point after we left, I broke the bottle of olive oil I bought from them (I won’t go into how), they heard about it and they saw that another bottle was brought to me to the village where we had lunch. I was so touched by their generosity and thoughtfulness. 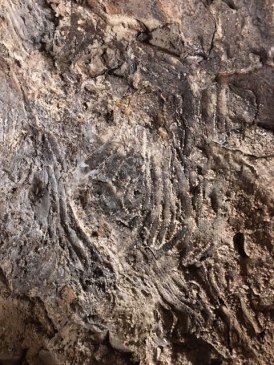 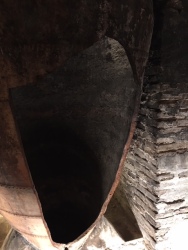 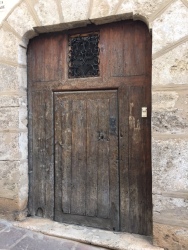 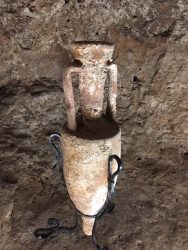 Then we went to the town of Requena. Of course, it has it’s own castle. But we went to taste some wines and to take a walk into the past – the distant past. To the time when the Moors were ruling all of Spain and they utilized the caves below to store grain, (they weren’t drinkers) before the Spanish were storing wine in them. We all know the Moors are no longer running the show so the caves were converted to wine cellars and the rest is, literally, history. On some of the walls, you could see the finger prints of the people who had lined them with mortar centuries ago. Some of it was chipping off but most of it was still there.

In the winery we went to, the caves go back to times when they stored the wine in large terra-cotta vessels, so large we have no idea how they could ever have gotten them down there. We watched a video of donkey’s pulling them in 100 year old photos, but the stairs I went down couldn’t have been traversed by donkeys and there wasn’t an opening large enough to accommodate the immense size of the cisterns. But there they were, the vessels are still down there and you can see them in the pictures. The wine was great too and Anna, who showed us around, was very nice and while she said here English wasn’t good, it was excellent. 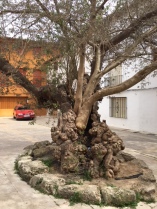 Our lunch at Los Cubillos Gastrobar, ( https://restauranteloscubillos.com/ ) right below the castle walls, was a Menu del Dia – of the usual 3 courses, but the food was local and one of the tastiest I’ve had since arriving here in March. The staff was really nice too. And spending two hours to eat lunch isn’t half bad. But if I get asked about American politics one more time I’ll jump off a castle. And here I can make good on that threat!

As lunch ended and it was time to go back to Valencia, my replacement olive oil arrived. I was so surprised. There was no reason for them to do this for me and yet they had – unbidden. I’ll enjoy it that much more every time I drizzle on something or dip something in it. A taste from a special day, with new friends in a place I’ve never been. I’m smiling thinking about it again already.