Jeff needed to head to Cordoba to pick something up. Something that couldn’t be shipped. And he asked me if I wanted to tag along. Heck yeah! Being an American, and that long road trips are in our DNA, I had my bag packed in 5 minutes and was waiting by the front door at … END_OF_DOCUMENT_TOKEN_TO_BE_REPLACED

Today was a day. A monumental day. Jeff got the vaccine. And we did a few other things, too. It started out early, and only 6 hours later we were home again. I like to be early to things. To me, being late is disrespectful and just plain dumb. The early bird catches the worm. … END_OF_DOCUMENT_TOKEN_TO_BE_REPLACED

Under the heading of ‘What can go wrong, will go wrong’, the last 12 hours have been interesting. It felt a little like we were Tina Fey and Steve Carell in the movie ‘Date Night’. How can so many things stack up against you? We were spending a quiet evening at home watching ‘Drunk History’ … END_OF_DOCUMENT_TOKEN_TO_BE_REPLACED

I’ve been told I have a ‘Justice Complex’. But I figure if there is one complex to have, justice is not a bad one. And if there’s one thing I can’t stand it’s bullies and boundary-crossers. People who think it’s OK to intentionally make other people’s lives less wonderful, and sometimes much harder, than they need to be. And I just won’t have it. END_OF_DOCUMENT_TOKEN_TO_BE_REPLACED

When we moved to Valencia, everything was different. I felt so bombarded by the differences that any subtlety or shades of grey were completely missed. The things we were dealing with were all primary colors and right in our faces. Now that we’ve lived in Spain for 16 months, I notice other things. Jeff talked … END_OF_DOCUMENT_TOKEN_TO_BE_REPLACED

Dear God in Heaven. How long can Fallas go on? I mean, actually how many hours a day, # of fireworks, parades, more parades, marching bands, more fireworks, light shows and people and more people. Dear Lord, we have only been here 2 and a half weeks and we’re Fallas’d out.

I’m including pictures from our venturing out yesterday. We had spent most of Saturday in bed watching Netflix, stocking up at the Mercadona, and generally being very lazy and napping. But that didn’t mean we weren’t participating in Fallas. Because no matter where you are in Valencia, even buried in a hole, you’ll experience Fallas every moment of every day and night, whether you want to or not.

The booms and even bigger booms, all night long. The laser light show in the vacant lot near our house and the music, blasting until 4am this morning, along with BOOMs that shook the windows! We are so tired today and it’s not because we had a rough weekend of Fallas activities. Its because you can’t sleep in this city for an entire week. If we had flown in this last Thursday it would have been perfect. The jet lag would have lined up just right.

So many people I know here, old timers who have been to more than one Fallas, left town. They’re in Toledo, Seville and Madrid. They got the HELL OUTTA DODGE. Why? Well, because it’s Fallas!! And nothing about Fallas is small. No. It’s all over the top and a little hodge podge.

There are parts of Fallas that are charming. The parade yesterday of Fallera who are bringing flowers to the Plaza de la Virgin to make her cape and dress out of red and white flowers. Lovely. (see pics) The parade went on for something like 8 hours. An interesting tradition. 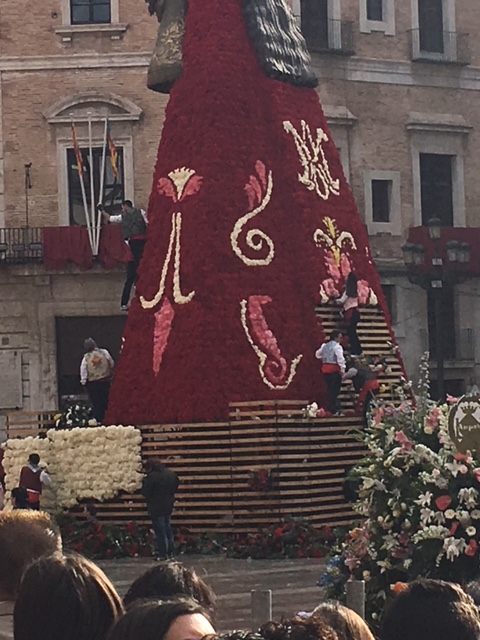 Then we went to Rusafa to see the light show at 8pm. Jeff’s take on it?

It was a lighting loop with a Pink Floyd sound track that he found surprisingly appropriate. ‘Run Like Hell’ played over the cheesy display. We left after 5 minutes, or tried to. It was so packed we couldn’t move.

Then we came home and laid in bed to noise that would shame a Fraternity during Hell Week. Tonight is the ‘Crema’. This is when they’ll burn the Fallas. We can’t wait for this because it will be over. Officially OVER. The booms and the music and the Oompa Bands, that just now marched down our street for the 400th time – yeah, they’ll all be gone.

And next year? We’ll be in Toledo or some other non-Fallas place where blissful sleep for that week will be in our future.

6 thoughts on “Breaking up with Fallas”

Scroll to Top
Sabicons
The Journey