Jeff needed to head to Cordoba to pick something up. Something that couldn’t be shipped. And he asked me if I wanted to tag along. Heck yeah! Being an American, and that long road trips are in our DNA, I had my bag packed in 5 minutes and was waiting by the front door at … END_OF_DOCUMENT_TOKEN_TO_BE_REPLACED

Today was a day. A monumental day. Jeff got the vaccine. And we did a few other things, too. It started out early, and only 6 hours later we were home again. I like to be early to things. To me, being late is disrespectful and just plain dumb. The early bird catches the worm. … END_OF_DOCUMENT_TOKEN_TO_BE_REPLACED

Under the heading of ‘What can go wrong, will go wrong’, the last 12 hours have been interesting. It felt a little like we were Tina Fey and Steve Carell in the movie ‘Date Night’. How can so many things stack up against you? We were spending a quiet evening at home watching ‘Drunk History’ … END_OF_DOCUMENT_TOKEN_TO_BE_REPLACED

I’ve been told I have a ‘Justice Complex’. But I figure if there is one complex to have, justice is not a bad one. And if there’s one thing I can’t stand it’s bullies and boundary-crossers. People who think it’s OK to intentionally make other people’s lives less wonderful, and sometimes much harder, than they need to be. And I just won’t have it. END_OF_DOCUMENT_TOKEN_TO_BE_REPLACED

When we moved to Valencia, everything was different. I felt so bombarded by the differences that any subtlety or shades of grey were completely missed. The things we were dealing with were all primary colors and right in our faces. Now that we’ve lived in Spain for 16 months, I notice other things. Jeff talked … END_OF_DOCUMENT_TOKEN_TO_BE_REPLACED

I have a natural affinity for pilgrims or explorers. It’s not so much their tales of hardship, although I admire those. Or the adventures they had; those sound great too. But it’s the forward motion. Ahead is better than back, and that’s just where they’re going.

The last week or so, I’ve been restless feeling like my feet are stuck. All my organizing and sorting has been an attempt to kill inertia. The inertia of the ‘hurry up and wait’   bubble we’ve been living in for the last two months.

In the rest of my life, I’m a person who weighs options and then makes a decision. Quickly devising a plan, and then executing it. No hemming. No hawing – whatever that is. And I go – forward. Generally, my husband relies on my approach because all he has to do is sit back and watch. He’ll show up at the end when the champagne is uncorked, or to clean up the blood, when I fall down. We all have our roles. 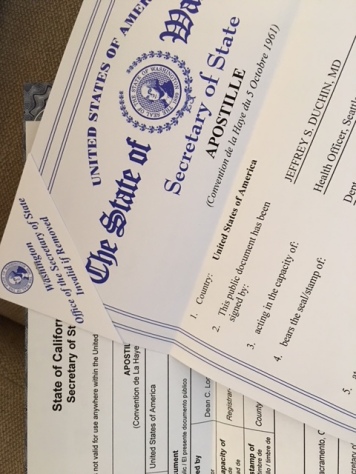 But in this process to get ourselves moved 7 thousand miles away, the pace is slower than I have ever moved at in any other project in my life. Send a request for document – wait. Get said document and send it off to be Apostlized – wait. Order an FBI background check – wait (mostly to see if they accept my terrible finger prints after 3 months of, oh yeah, waiting!). I have found a work around and will be putting that plan into place shortly. And that’s only for US, stuff. Don’t get me started on emailing, calling or carrier pigeon to anyone in Spain! It’s like shouting into a well.

But today – the universe gave me a little gift. I got back both our birth certificates and our marriage certificate and they have been Apostilized! I’ve never been so happy to see things I didn’t care at all about 3 months ago. And I took great pride – though I had almost nothing to do with it – when they arrived in those self-addressed stamped envelopes.

When I held them up to Jeff he told me to put them away and to ensure that nothing happened to them – so precious are they.

‘Don’t take any chances, considering the process of getting new ones.’

I almost laughed. If we had to get new ones, it would be me who arranged for them. Him, not being a person who ever fills out the form or follows up on the minutia of the mundane.  When our children were little and came home with the packet of forms to be filled out on the first day of school every year, Jeff was the one pacing behind me complaining about the redundancy.

‘They went to the same school less than 3 months ago. Why do we have to fill out the same forms? Nothing has changed.’

‘We just do.’ as I filled in two sets, for both the kids.

‘Yes, perhaps, but unless you’re going to take up a pen and start writing on same said forms, I don’t have time for the musings.’ It was probably 11pm.

‘Someone should do something about this. It’s crazy.’

‘Well, ‘someone’ could go to the Parent meetings and complain. I don’t have time for that either, so I’m filling in the forms.’

But in this case, I understood Jeff’s concern for our Apostlized documents. They are precious cargo and represent progress.

Today, the universe kicked inertia in the ass. I have forward motion again! Something to celebrate. Perhaps we won’t wait til it’s all done to pop some champagne.

One thought on “Death by Inertia”